Fans anticipate as Dayo Amusa gets back to music studio 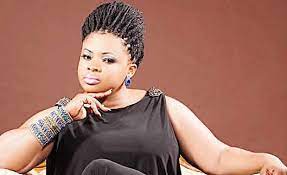 Fans of the talented actress can now have a new feel as she is set to reawaken her suspended talent.

The singer who recently uploaded a video of herself in a studio session recording a new song, hinted fans to anticipate the release of her single and upcoming Extended Play(EP).

The song, according to the actress, is entitled ‘Rich and Famous.’

In 2015, the actress released her debut single entitled ‘Aye Mii.’ She went on to feature Oritsefemi in a remix of the same song in 2016.

Convinced of her singing abilities, Amusa went on to release over four singles: Alejo, Blow My Mind, Mama’s Love, Omodaddy.