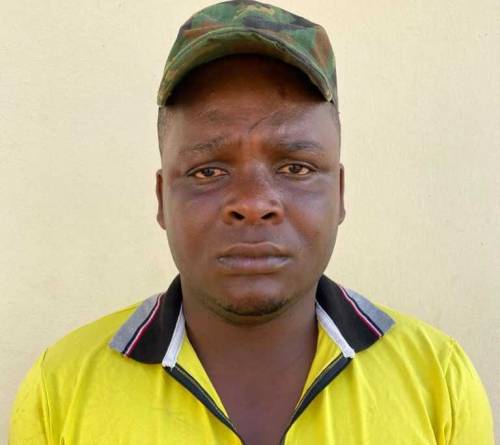 Former army lance corporal allegedly responsible for training and recruiting people into the Eastern Security Network (ESN), the security arm of the proscribed Indigenous People of Biafra, has been arrested by the police.

According to Premium Times, the ex-army officer, who was dismissed from service, was arrested a few days after a top commander of the terror group, Awurum Eze, was arrested in Aba, Abia State.

The group is alleged to have been responsible for the killing of security agents, attack on police and other public facilities in the South-East and South-South zones. IPOB has denied the allegations.

According to sources, the 32-year-old dismissed soldier, whose name was given as Livinus Owalum-Barnabas, was arrested on Sunday, at Gwagwalada Area Council of the FCT by men of the Inspector General of Police Intelligence Response Team (IRT).

The ex-soldier was said to have been recruited by some members of IPOB in Abuja and sent to train newly recruited IPOB/ESN in two of their training Camps in Abia and Delta States.

Upon his arrest, the suspect confessed to having been employed by the IPOB who promised to pay him double of what he was receiving in the army.

He also confessed to have trained at least 2,000 members of the ESN on combat operations, ambush and use of firearms, in the two camps between last September and December.

The suspect told security operatives he was engaged by one ‘Mr Ebere’ who paid him N100,000 before he proceeded to Abia State.

He said Mr Ebere was later arrested alongside 14 other suspected members of the group who were using a Church premises for their meetings where they raised money to be sent to the South-east for buying of ammunition.

Items recovered from the ex-soldier were receipts, list of contributors, list of members and oaths of allegiance to Biafra and Nnamdi Kanu.

There have been attacks on police stations, policemen and offices of the Independent National Electoral Commission in the South-East and South-South, which have been largely blamed on unknown gunmen.