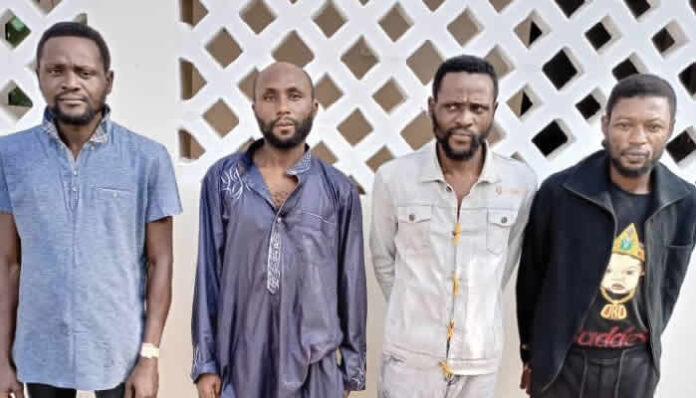 Twins who are sons of a late retired soldier and two of their accomplices whose fathers are also ex-army personnel have been arrested by the police for allegedly carrying out robberies in different parts of Lagos State.

The twins belong to different gangs but sometimes joined forces, with either of them wearing their late father’s uniform during operations.

The four suspects were apprehended recently at a hotel in the Idimu area of the state by operatives of the Force Intelligence Response Team. The uniform and a locally-made gun were said to have been recovered from them.

The police said the suspects did not come out of hiding until a meeting facilitated by some traders at the Alaba International Market who bought stolen items from them held at the hotel.

It was gathered that they got under the spotlight of the detectives after one of their victims, Abiodun Sadiq whose Toyota Corolla was stolen in August 2020 at gunpoint, petitioned the Inspector-General of Police, Mohammed Adamu.

“While we couldn’t arrest the suspects because they were hiding at the military cantonments, we went after their trusted receivers at Alaba International Market, arrested them and made them organise a rendezvous.

“The robbers were told that we had a big robbery operation for them and we agreed to meet in a hotel at Idimu area of Lagos. We got there and found them drinking and apprehended the four of them,” a police source said.

Taiwo, 29, explained that his twin brother, Kehinde, lured him into armed robbery, adding that they formed their separate gangs to avoid being caught by the police at the same time.

He said, “I reside around Ikeja cantonment area. My father was a retired soldier. I attended Nigeria Army Children School in Ikeja and dropped out of secondary school because there was no money. I was introduced into robbery by my twin brother, Kehinde and we have gone for several robbery operations in Lagos.

“Later, I joined another gang but whenever he wanted me to assist his gang, I did. One of us would act as a commercial bus driver while our gang members would be on the bus. At times, we would pick them along the way.

“One of us would wear uniform so that our target would assume it is safe to board the bus since there is a soldier inside. We normally operate along Lagos-Abeokuta Expressway, Lasu Igando route and Ikorodu Road. The highest I have made after an operation is N100,000.”

Taiwo stated that they engaged Samuel to sell stolen phones and other electronic gadgets at Alaba International Market.

He said the gang contributed money to buy double-barrelled guns from one Alfred based in Cotonou, Benin Republic. “He brought the guns to Nigeria for us. Unfortunately, police found my gun under the dash board,” he added.

Kehinde said he and Taiwo led a decent life until the death of their father, claiming that their mother said to be a highway sweeper could not afford to take care of them.

He stated, “Taiwo and I dropped out of secondary school after our father who was a soldier died. My mother could not afford to train us. I was sent to learn how to repair vehicles which I did for years till I met one Cyril who was my long-time friend. We formed a three-man gang together with Peter (Samuel). I was the one who introduced my twin brother to robbery. He kept asking where I got money and I had no choice but to show him the way. Along the line, we felt it was necessary to separate so that police would not catch us together. Unfortunately, we were arrested on the day I wanted to help his gang.”

He stated that they attacked several persons around Oshodi at night and carjacked a Toyota Corolla in one of their operations.

“We flagged down the Toyota Corolla at Oshodi and asked the driver to carry us to Iyana Iba. We assured him that we were ready to pay any amount. Greed pushed me to crime,” Kehinde said.

Twenty-two-year-old Samuel, a cobbler, said he joined the gang through Kehinde whom he met four years ago at a joint in Oshodi. Samuel added that he had participated in many robberies, including the one at Oshodi.

He said, “Around 9pm we stopped a cab man and told him that we were going to Iyana Iba. We paid the fare without bargaining. Close to Mile 2 Bridge, we forced him to stop and took over the car. We did several operations before I decided to go my own way because we could no longer agree on the sharing formula.

“I formed my own gang and we snatched one Sienna bus. Unfortunately, the police saw it where we parked it and towed it. We cannot go and claim it because we do not have documents. My father is a retired soldier; he currently works as a security officer at Ajah, Lagos.”

Bamidele, an electrician, said he took part in the robberies with the twins and others on Lekki-Ajah Expressway, Airport Road and Lagos-Abeokuta Expressway. He added that he was once arrested for robbery and remanded in prison custody for months.

He said, “After my release I rejoined my gang. We normally used the military uniform to deceive passengers before we would rob them.”