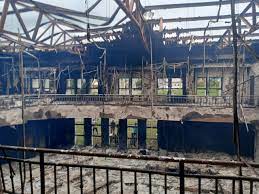 The Kogi State House of Assembly was completely destroyed by fire on Monday.
Although it was said that the fire began in the early morning, security personnel only became aware of it at 7 am.

The Hallow Chamber, where lawmakers make laws, was the area most severely damaged and was completely destroyed.
The state security adviser, Commander Jerry Omodara, and Speaker of the House Mathew Kolawole were among the first people to arrive at the assembly building.

While speaking with reporters, the Speaker expressed his suspicion of sabotage but did not specify where it might originate.

When asked if it may possibly have been related to the recent incident involving the Assembly and the Dangote groups, Kolawole responded that the House would let the security agencies discover the true cause.

“We should leave security people to do their work and give us a report going forward” the speaker said.