PDP should plead with Nigerians over Atiku’s ethic comment-Wike 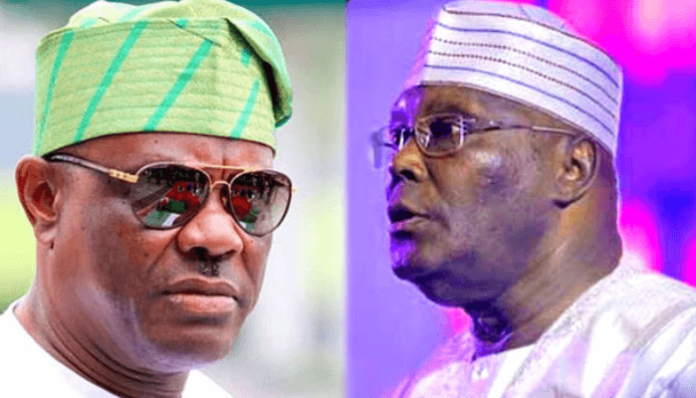 Following certain contentious remarks made by Atiku Abubakar, the PDP’s presidential candidate, Nyesom Wike, the governor of Rivers State, has requested an apology from the PDP on behalf of Nigerians.

Atiku claimed on Sunday in Kaduna that the north does not require Yoruba or Igbo candidates for the president, adding that he is the only one deserving of the highly sought-after position.

Wike, in his reaction to the comments which generated controversy across the country, said while he doubts the possibility of Atiku making such a sensational statement at this critical time of the Nation’s history, such posture would justify his fight for equity, justice and fairness in the PDP.

According to him, the party must urgently address the issue and appeal to Nigerians lest the people stop rallying behind the PDP and begin to see the party as one where justice and equity do not abound.

Governor Wike also challenged the National Chairman of the Party, Iyorchia Ayu on his defense of the corruption allegations he leveled against him and condemned as ridiculous, the recommendations of the party’s Board of Trustees on the crisis in the PDP.

In the past few days, a couple of events have been threatening the peace within Peoples Democratic Party.

Most notable amongst the recent incidents were the defense of the National Chairman against the allegations of corruption by Govenor Wike, the recommendations of the Board of Trustees on the crisis over leadership positions and a the comment credited to the party’s Presidential Candidate, Atiku Abubakar about the North not needing the Yoruba or Igbo candidates.

Wike had earlier said that the national leadership of the PDP needs to do the right thing, if the party must win the presidential election in 2023.

The right thing, Governor Wike insisted, is the resignation of Senator Iyorchia Ayu as PDP national chairman, in order for a southerner to occupy the seat within the principle of equity, fairness and justice.

He emphasized that any leader of a group who causes crisis within the group that he leads, truly lacks the requisite skills to navigate affairs of such group.

“This is the time to show leadership skill on the part of those who are leaders of the party. Alhaji Atiku Abubakar is the presidential candidate. He is the one who feels the pain.”

Governor Wike made reference to the party’s constitution that spells it out in Section 7 (3) (c) that that all political and elective positions must be zoned.

He wondered why it is now so difficult for Senator Ayu to respect the constitution or even keep to his promise and quit the office if a northern is elected as PDP standard bearer.