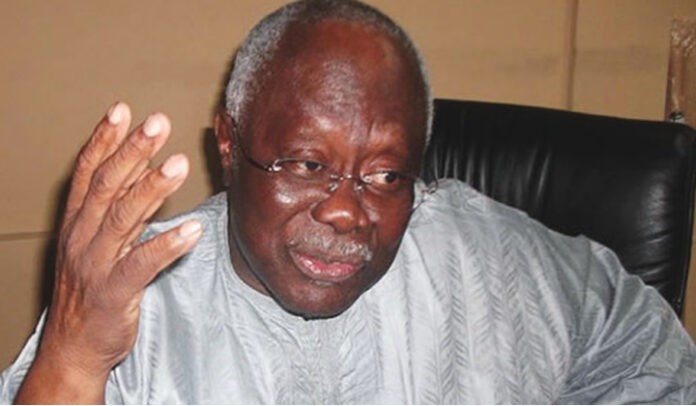 The main opposition party is evolving into a northern affair, according to Chief Bode George, the former chairman of the People’s Democratic Party (PDP) Board of Trustees (BoT), who also cautioned certain party stakeholders against turning it into a Northern Peoples Democratic Party.

Chief Bode George warned of a plot to sideline southerners, even as he called for unity within the party ahead of the 2023 polls.

Speaking with Punch, George called for togetherness rather than division among party leaders and stakeholders.

He said: “This conception of a revisit to the amalgamation period must never be allowed. They are turning the PDP into the Northern Peoples Democratic Party. The National Woman Leader was refused to address the party because she is from the South. What does that portend?

“Our young man, the National Youth Leader from the North was allowed to talk. What are they driving at for God’s sake?”

Meanwhile, some National Working Committee members opposed to the National Chairman of the party, Iyorchia Ayu, have accused the leadership of the party of marginalising them in the ongoing presidential campaigns.

While Arapaja returned the sum of N36m, the other five returned N28.8m each, citing a report in the media alleging they had been bribed by the national chairman to silence them on questions bordering on Ayu’s financial accountability.

Although, the party in a statement absolved the former Senate President of any wrongdoing, noting that the disbursement of the controversial housing allowance passed through due process; the NWC members insisted that at no point were they part of a meeting where the issue was tabled for deliberations.

The party has since moved on with calls on Ayu to resign his chairmanship of the party falling on deaf ears.

As moves to get the party to form a united front intensify, the National Woman Leader of the party, Stella Effah-Attoe, has said there is a deliberate plot to undermine her office in the ongoing campaigns by the party.

In a memo, titled: “Deliberate attempts to undermine my office, Office of the National Woman Leader and to sideline my humble person: An unacceptable hindrance,” she lamented the ill-treatment allegedly meted out to her at two campaign rallies recently.

“At the flag-off ceremony of the PDP campaigns in Uyo, Akwa Ibom State on October 10, 2022, serious attempts were made to prevent me from addressing the PDP audience at the Uyo stadium. It must be stated here that it is a customary tradition in our party for the National Woman Leader and the National Youth Leader to address rallies in conjunction with party candidates, party chairmen, et al.

“Unfortunately, in Uyo, every attempt was made to prevent me from addressing party faithful. I was told that there was a clear directive not to allow me to speak to the crowd. It got to the ridiculous extent of these agents calling on Senator Uche Ekwunife to speak to the audience on behalf of PDP women.

“Senator Ekwunife was very embarrassed but she was prodded to do it. Iyom Josephine Anenih, a former PDP National Woman Leader drew the attention of some party leaders to this anomaly. It was then that I was reluctantly called to address the audience on behalf of the PDP women. This unfortunate development did not go unnoticed by the party faithful, who found the whole drama very embarrassing and childish.

“At the PDP Kaduna rally on Monday, October 17, 2022, the National Youth Leader was called upon to address the crowd on behalf of the PDP youths, which he did perfectly well, to the admiration of the populace. I was present at the event in Kaduna. I was even seated beside the National Youth Leader but nobody called me to address the audience on behalf of the PDP women.

“Rather, the spectacle was a very ridiculous announcement calling on Dr Baraka Sani (Director of the PDP Support Groups, in the Campaign Council), to address the crowd on behalf of the PDP women. The entire audience was surprised and confused.

“People started asking questions there and then. Many wondered why the National Youth Leader was called upon to perform his traditional and official role, while the National Woman Leader was deliberately prevented from doing hers.

“There and then, some people tried to explain that unfortunate scenario in different colourations. While a lot of people found the occurrence very offensive, I smiled over the unfortunate incident in total sympathy with the perpetrators of such childish displays.

“It may interest you to know that the happening has gone viral, to the disgust of many Nigerians. Specifically, the Kaduna occurrence has seriously painted our great party in a negative light. Very, very sad indeed!

“I will continue to perform my duties to the best of my ability and to the benefit of our esteemed party, within the confines of my safety and the tolerance level around me.

“The purpose of this elaborate analysis is to bring the attention of the members of the PDP National Working Committee to these strange developments happening around my office and by extension, my humble person,” the memo read.

Also speaking, an NWC member who refunded his share of the housing allowance said he and five others who rejected the money had been branded “Wike’s people,” adding that they have been dumped by the National Chairman of the party.

Speaking to the Punch, he said, “Those of us who refunded money has been totally sidelined. They called us Wike’s people and they don’t want us to have anything to do with the campaigns.

“For now, the NWC is not functioning. The campaigns have taken over every other thing. The presidential candidate does not know what to do but it appears he wants Ayu to remain. As a result, Ayu is ready to fight Wike to the finish.

Following the Rivers State Governor, Nyesom Wike’s rejection of the recommendation by the Board of Trustees panel that Ayu should quit after the elections, a member of NEC and Deputy National Youth Leader of the PDP, Timothy Osadolor has advised the party to move on, saying the governor and his four other colleagues were not bigger than the party.

This is against the backdrop of Wike’s description of the BoT panel’s recommendation as ‘ridiculous.’

In an interview with Punch, Osadolor said Wike’s rejection of the pleas by BoT members and eminent leaders of the party was unbecoming of a leader who sees himself as a party man.

Almost a week after the submission of a report by the Peoples Democratic Party’s Board of Trustees ad-hoc reconciliation committee, the National Chairman of the party has yet to call a meeting of the NEC to deliberate on the recommendations therein.

Last week, the committee chaired by the acting chairman of the BoT, Adolphus Wabara came up with several resolutions aimed at reconciling the camps of the National Chairman and the party’s presidential candidate, Atiku Abubakar on the one hand and the pro-Wike group on the other.

As the search for an amicable resolution of the crisis intensified, the Adolphus Wabara-led committee last week, called on Ayu to commit to quitting his seat immediately after the elections are over in 2023.

While Ayu attended the meeting where the BoT submitted its report, a member of the panel and former Minister of Special Duties and Inter-Governmental Affairs, Tanimu Turaki said NEC is yet to be informed of a meeting by the National Chairman.

“We await his official communication in that respect (NEC meeting),” Tanimu told Punch.