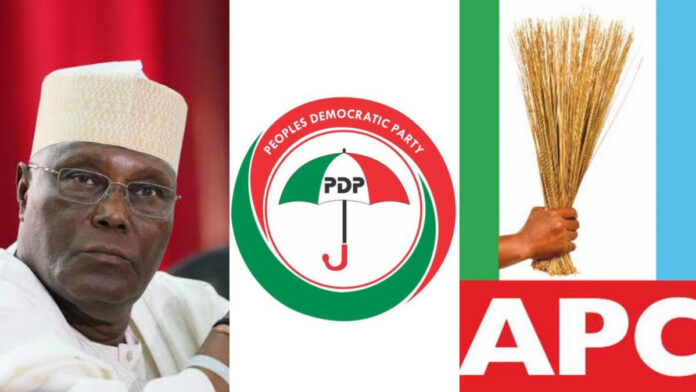 Leaders of Peoples Democratic Party and its Presidential candidate, Alhaji Atiku Abubakar are playing on our seeming forgetfulness and insulting our collective intelligence.

Having consistently shown lack of capacity for introspection, PDP Leaders have been going about the country slandering the All Progressives Congress-led government of President Muhammadu Buhari, believing that as Nigerians we have forgotten their atrocious era and that we are unappreciative ignoramuses.

Notably Atiku Abubakar, the presidential candidate of the party that once contemplated changing its brand name because of its atrocious record, has been emboldened by our assumed forgetfulness as a nation, mounting podiums and trying to deodorise and beautify the  party’s ugly era.

Alhaji Atiku blamed the APC for the emergence of Boko Haram, forgetting that the insurgents emerged in 2009 under his party’s watch. He blamed Buhari over the economic challenges, forgetting that he opportunistically joined the coalition that toppled the clueless PDP government of President Jonathan, when the economy was nose diving.

Atiku  has now been joined by Abubakar Saraki, the failed Senate President and saboteur-in-chief of the Buhari agenda, who in his latest comment in Ilorin,  urged Nigerians to “go back to the PDP at both the State and the national levels”. In the famous words of Dino Melaye, we say “PDP: God forbid ”.

Pushing his party’s propaganda to insane level, Saraki said:  “From my trip round the country, I discovered that Nigerians are tired of the ruling APC government because they are overwhelmed with hardships,” he said.

The truth be told, PDP in a sane society should not be canvassing for votes to be returned to office, when during their 16 years in power, they laid the foundation for the challenges we face today.

Let us not forget what the party of looters did to our treasury, depleting foreign reserves to $28 billion by May 2015, even though a record N75 trillion flowed into the treasury  from oil sales alone, with almost nothing to show.

Let us not forget that the party of looters nurtured the conditions that led to the emergence of Boko Haram on our soil and it was so clueless about how to deal with the menace as our cities and people were bombed and maimed by Boko Haram terrorists.

Let us not forget that for six years, the PDP allowed the insurgents to declare a Caliphate on our soil, controlling 17 local governments in Borno State and four in Adamawa, making Atiku unable to go to Jada, his hometown.

Let us not forget that the PDP left our infrastructure decrepit, highways impassable after allotted money to contractors had been shared by party stalwarts.

Let us not forget that this party now posing as recovery agents had already grounded our country and made our economy comatose before Buhari took over on 29 May 2015.

Let us not forget that the two poorest states in our country, Sokoto and Bayelsa are states being governed by the PDP in the last 8 years.

In the past seven and a half years, the Buhari government has been trying to clear the mess left  by the PDP predecessors. Despite the challenges faced on the economic front, among which is dwindling revenue exacerbated by oil theft, the government has been able to showcase many game changing projects.

One of them which temporarily opened 15 December, is the Second Niger Bridge. The PDP promised the South East states  and Ifeanyi Okowa’s Delta state that it would do the bridge. For 16 years, the party made one empty promise after another. Muhammadu Buhari in 2018 decided to take on the project. He awarded it all over again and in record time the 1.6 kilometres long bridge is ready.

And it comes with other ancillary infrastructure including a 10.3 km  highway, a bypass to Owerri and a toll station at Obosi.

While we promise Nigerians that our presidential candidate, Asiwaju Bola Ahmed Tinubu, will build on Buhari’s legacy and improve the economy and the security situation, we can only say to the PDP:  “Nigerians have rejected you and our people will not buy your lies again!”