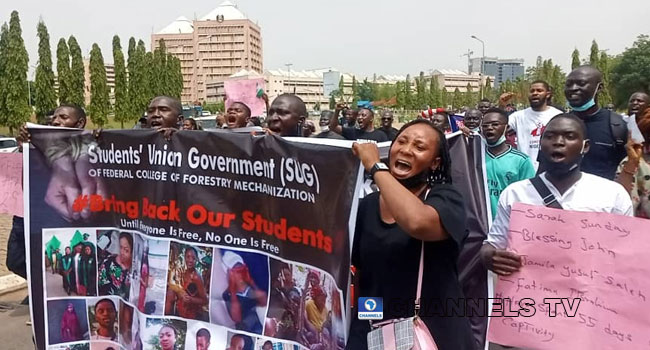 PARENTS of students abducted from the College of Forestry Mechanization, Afaka in Kaduna State, on Tuesday, staged a protest at the National Assembly complex, but were denied entry.

The parents lamented the alleged negligence of the state government, which they accused of not doing anything to secure the release of their children.

Members of the Students Union Government of the institution and some civil society organisations also joined the protest.

The protesters blocked the entrance to the Federal Secretariat area of the NASS complex, carrying placards with various inscriptions. They also chanted solidarity songs.

Recall that 39 students were kidnapped on March 11, from the Federal College of Forestry Mechanization by bandits dressed in military uniforms.

So far, 10 of the students have been released while 29 are still with their abductors.