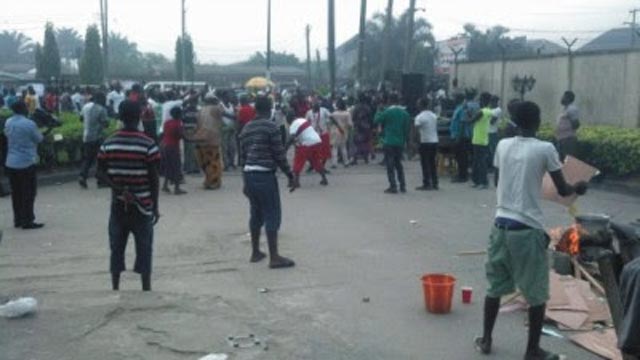 Pandemonium broke out in the late hours of Sunday, May 2, 2021, at Alhaji Ede, Igando area of Lagos State, as suspected cult members shot one of their rivals at closed range.

The incident, according to an eyewitnesses happened around 10:00 pm, leaving residents of the area in panic.

One of the eyewitnesses, Ola Oloyede said a cult clash between Aiye and Eye confraternity has been going on since last year, adding that the cult members involved in the clash have been killing themselves in targetted and reprisal attacks.

“The cult clash has been ongoing since last year, and they haven’t killed at all, I can confirm to you that about three persons have been killed between last year and now. These are people that I know, how much more others I don’t know? They have just been killing themselves anyhow.

“Last night I was just indoors, and all of a sudden I had some boys shouting -‘don’t let him go, he’s the one’… then gunshots followed. It was this morning that we were told about a boy known as Kolyboy that was killed,” Oloyede told our correspondent.

A resident of the area who doesn’t want her name mentioned, revealed that after the deceased was shot, the assailants left him in his pool of blood.

“Some people summon the courage to save his life after he was shot. He was rushed to Alimosho General Hospital in Igando here.

He couldn’t be treated there for some reasons I don’t know, but the people who rushed him there were referred to another hospital in Ikeja. Unfortunately, before they made it to the hospital they were referred to, Kolyboy passed away,” the resident said.

Efforts to reach Hakeem Odumosu, the Lagos Commissioner of Police, to confirm the incident proved abortive, as he didn’t answer his phone.