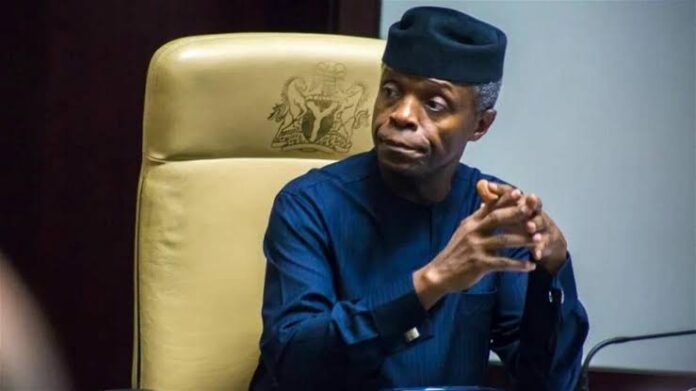 This was contained in a statement signed by his Senior Special Assistant on Media and Publicity, Laolu Akande, on Wednesday.

Osinbajo leads Nigeria’s Energy Transition Implementation Working Group on the US mission with meetings starting from September 1, 2022, to promote the plan and secure global support from the US government, the private sector, and other development partners.

In the statement titled ‘Osinbajo travels to United States, Nigeria’s energy transition plan on the Agenda,’ Osinbajo will meet US Vice President, Kamala Harris; US Secretary of Energy, Jennifer Granholm; Secretary of Treasury, Janet Yellen, and President of World Bank Group, David Malpass, among others, while away.

The homegrown strategy which was developed for the attainment of 2060 net-zero emissions seeks commitment in five critical sectors: Power, Cooking, Oil & Gas, Transport & Industry. Nigeria needs $410bn to deliver the Transition Plan by 2060.

At the launch, Osinbajo called for a $10bn initial support package for Africa to meet its year-on-year investment target in renewable energy.

This was as he said Africa’s increasing energy gaps require decisive and urgent collaboration to take ownership of the continent’s transition pathways.

Consequently, the World Bank and a renewable energy organization – Sun Africa, pledged a sum of $1.5bn each totaling an initial $3bn investment to support the implementation of Nigeria’s Energy Transition Plan.

While away, Osinbajo will also speak on Nigeria’s Energy Transition Plan at the Centre for Global Development in Washington DC.

The Vice President’s delegation to the U.S. includes the Minister of Finance, Budget and National Planning, Dr Zainab Ahmed; Minister of Works and Housing, Babatunde Fashola; Minister of Power, Abubakar Aliyu; Minister of Environment, Mohammed Abdullahi; Minister of State for Petroleum Resources, Timipre Sylva and the Special Representative of the UN Secretary-General/CEO for Sustainable Energy for All, Ms Damilola Ogunbiyi and Nigeria’s Ambassador to the United States, Dr. Uzoma Emenike.

“The Vice President will return to Abuja early next week,” the statement said.