One killed as Lagos building burns down to the ground 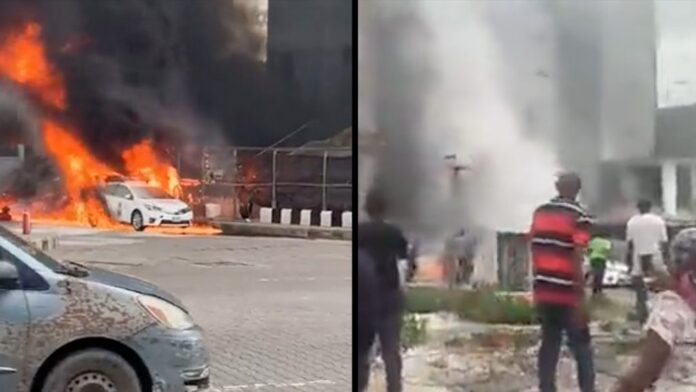 One body was discovered on Tuesday from the fire incident that destroyed a four-story structure at Adeola Odeku in Victoria Island, Lagos.

Adeseye Margaret, the Director of the Lagos State Fire and Rescue Service, confirmed that the casualty was a male.

The fire event happened at Plot 1114, Adeola Odeku Str, by Eletu Ogabi Close, across from Keystone Bank, on Victoria Island.

She confirmed this in her updates on the fire incident on Tuesday afternoon. She claims that a distress call was made about the occurrence at 10:03 a.m., and the Oba Oniru Fire Station arrived.

She explained that the industrial generating set, which allegedly exploded and destroyed the structure while being repaired, was the origin of the fire outbreak.

“The generator which was housed within the premises of a commercial bank, also affected an adjoining Toyota Saloon Car belonging to the Rapid Response Squad of the Lagos Command of the Nigerian Police stationed outside the premises.

“Unfortunately, a male adult was recovered severely burnt beyond recognition and handed over to the Police from Bar-Beach Division while the four storey commercial building was saved and the RRS Policemen escaped unhurt.

“Further report will be given as the investigation into the cause of incident is completed.”

Earlier, Lagos RRS, on its official Facebook page, had narrated how one of its vehicles was involved in the fire.

“Although lives were lost in the incident but our officers escaped with injuries.

“While we pray for the repose of the souls of those whose lives were lost in the incident, we

appreciate those who have been calling and sending messages to our Commander, CSP Olayinka Egbeyemi.

“Thank you for your concerns.”

According to reports, the fire destroyed some nearby property and spread to others.

However, the fire fighters were able to put it out.