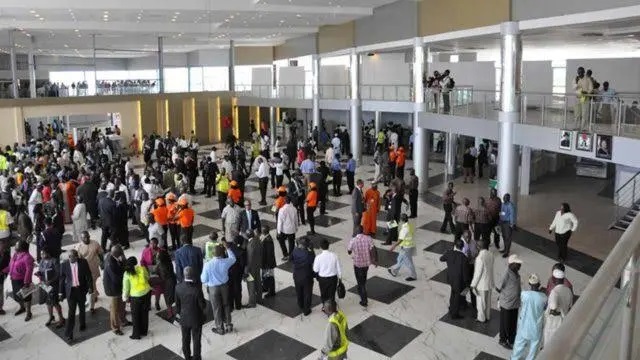 Tuesday’s early-morning flights were canceled due to the closure of Lagos Terminal 2 at the Murtala Muhammed Airport by aviation workers (MMA2).

Members of the Air Transport Services Senior Staff Association of Nigeria (ATSSSAN) blocked the entrance gates of the MMA2 terminal  to protest the “unprovoked termination” of the appointment of 34 aviation workers by the operators of the airport terminal, the B-Courtney Aviation Services Limited (BASL).

The situation forced airlines like Ibom Air and Air Peace operating within the airport terminal to stop flight operations.

Ibom Air, in a notice to passengers, said the action of the union will greatly impact its flights scheduled in and out of Lagos today.

Members of the union protest at MMA2 Airport in Lagos on Tuesday, November 1, 2022.

“We greatly regret the impact of this unexpected action on your day’s plans as we urge you to kindly stay close to all our communication channels for subsequent updates,” the airline said.

In a notice of strike by ATSSSAN, those affected in the disengagement include ATSSSAN Branch Chairman, Secretary, Treasurer and Women Leader who were said to demand “the payment of terminal benefits to staff members who exited the service of the company lawfully in line with the signed Conditions of Service”.

The union said BASL Management acted at a time when parties were on the table discussing the said payment, and there was nothing to suggest that negotiation has broken down irretrievably.

It considered the termination as victimisation of its members and excos who were merely carrying out their constitutional duties.

“In light of the above. ATSSSAN has declared industrial action against BASL and calls on all branches nationwide, as well as all professional association affiliated to ATSSSAN to withdraw services to all airlines operating into and out of the MMA2 Lagos immediately without fall,” said ATSSSAN Principal Deputy General Secretary, Frances Akinjole.

The operators of the terminal has not issued a statement on the development as of press time.