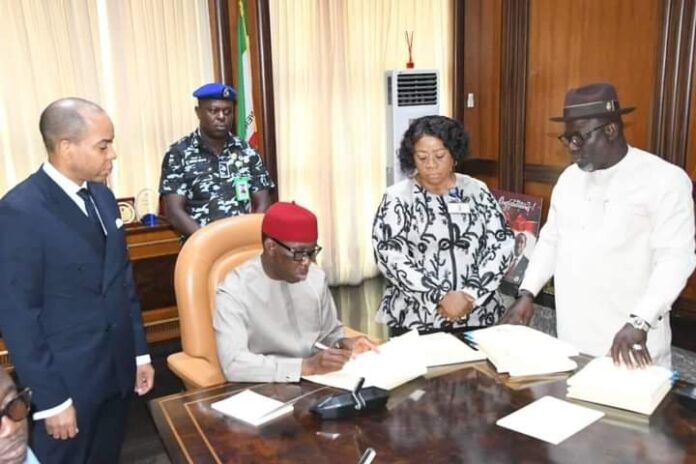 The budget, which is the last to be signed by Okowa as Governor of the state, comprises N235.5 billion for recurrent expenditure and N336.1billion as capital expenditure.

In his remarks after signing the Bills, Okowa assured Deltans that the state would strive to implement capital projects embedded in the 2023 Budget as well as endeavour to complete ongoing projects before the end of his tenure.

He commended the House of Assembly for its cooperation over the years, adding that his administration couldn’t have achieved the much it did without the strong support of the Assembly and Deltans.

“To have found time to work through these bills in spite of the electoral campaigns shows that you have stayed committed to our people who voted you into office.

“We will continue to remember you in the course of history because a lot has been done over the past seven and half years during which we have truly impacted on our people.

“We could have done better if we had a better security because we need a secured country for us to be able to impact more meaningfully to the people.

“But under the circumstances we have found ourselves, working with our people we have delivered the dividends of democracy to the best of our ability.

“Until May 28, 2023, we will remain functional and continue to impact on the lives of our people, including the youths to make them get entrepreneurial skills that will ultimately make them self-reliant,” Okowa stated.

On the other Bills signed into law, he said they would contribute to the socio-economic development of the state and thanked the lawnakers for their commitment to duty.

Presenting the Bills earlier, the Speaker of the Assembly, Chief Sherrif Oborevwori, said that the Bills went through all legislative process before being passed.

He expressed appreciation to the Governor and members of the House for their support and cooperation over the years he served as the longest serving Speaker of the House of Assembly.

“I wish to express our profound gratitude to you for the cordial working relationship and synergy existing between the House and the Executive.

“This has not only brought stability to the House but also prosperity to Deltans and development across the State.

“God has indeed been gracious to Delta State and the House of Assembly in particular. We have enjoyed peace and harmony which have resulted in the excellent working relationship among the members.

“As you remarked during the presentation of the 2023 Budget on the floor of the House that this is the last Budget you will be laying before the honourable House, this will also be the last Budget I will be presenting to His Excellency, the Governor for assent as a Speaker of the House of Assembly,” Oborevwori stated.