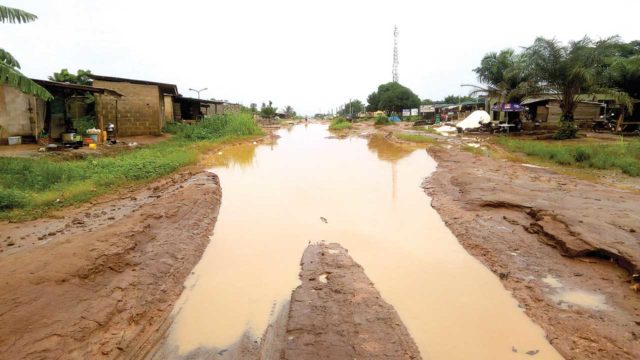 The people of Aiyetoro community on the border of Lagos State in Ogun State have cried out to the state government over the deteriorating condition of Ayobo-Aiyetoro road linking Lagos and Ogun, saying the condition of the road had stalled socio-economic growth of the area.

It would be recalled that the Lagos part of the road, up to Ayobo, was fixed by a former Governor, Akinwunmi Ambode, as part of a 21-border community roads project.

However, the Ogun part has deteriorated over time, with trenches, pot holes and ditches dotting the road.

A resident of Ayetoro, Mr Babatunde Sanusi, said, “We don’t know when the Ogun State Government will remember us in this town. This is a major road connecting Sango and ultimately Abeokuta.”

At the palace of the Onibudo of Aiyetoro, Oba Adewunmi Adeniyi, one of his chiefs, the Olukosi of Aiyetoro-Ibudo, Chief John Durojaiye, corroborated the concerns of the community, saying the palace had written several letters to the state government without any result.

He said, “For the past 10 years, we have been on this road. Our Kabiyesi has spent a lot fixing this road. We didn’t get any assistance from the government. The government doesn’t even know we exist, but at the time of elections, they will be begging us for votes.

“This particular road has been like this since the time of former Governor Ibikunle Amosun. But we are hoping that since the Iyana-Ipaja-Ayobo section which falls under Lagos State was fixed by former Gov Ambode.

“Though this road leads to Abeokuta, we can’t connect the state capital. You have to go to Command in Lagos to go to Abeokuta.”