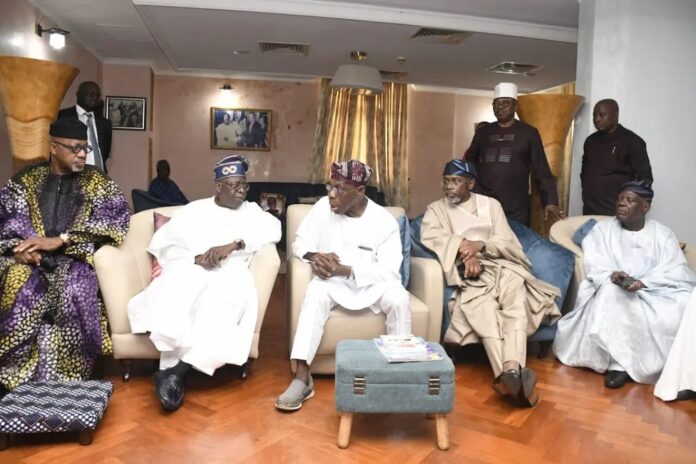 Former President Olusegun Obasanjo has sent a warning to some supporters of Bola Tinubu, Presidential Candidate of the ruling All Progressives Congress (APC).

Obasanjo, who was reacting to comment credited to Speaker of the House of Representatives, Femi Gbajabiamila on Tinubu’s visit to his residence, said some of the ex-Lagos governor’s supporters are spreading falsehood.

Both Obasanjo and Tinubu refused to address the media after the meeting.

But barely 24 hours after the meeting, Gbajabiamila spoke about what transpired during the meeting between Obasanjo and Tinubu.

He said Obasanjo made encouraging statements about Tinubu’s aspiration and even prayed for the APC presidential candidate.

His words: “When we were going to Obasanjo’s house, we were eight, including Asiwaju Tinubu and me; we didn’t want many people to know about the meeting. So, we were to meet Obasanjo and five others from his side. But when we eventually got there, we met something pleasantly shocking: a mammoth crowd of our supporters were already at the former president’s house waiting for us. So, Obasanjo told Asiwaju Tinubu to pick three people from his side and that he would pick three from his side to meet behind close doors. So, I, Chief Osoba and Chief Akande and Asiwaju went from our side. My people, what I heard there, what Obasanjo said, the victory of Asiwaju is assured.

Obasanjo spoke at length and we were all happy. He embraced our candidate like a brother, gave him a pat on the back, and prayed for him copiously.”

But in a statement by his Special Assistant on Media, Kehinde Akinyemi on Saturday, Obasanjo said the statements coming from those claiming to be supporters of Tinubu are “unhelpful.

The former President said the discussion during the visit was “more brotherly than political”, and at the request of Bola Tinubu, Chief Obasanjo agreed to no statement from either side.

Obasanjo said “Those claiming to be insiders at the meeting issuing statement on the discussion and those crediting to me statement I had not made are enemies of the visitor and are not doing the visit any good.