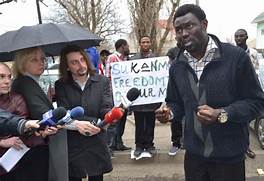 Ukraine has come under heavy attack following Russia’s invasion of the country in the guise of trying to demilitarize the country. Since the incident, the Nigerian government had made several attempts to evacuate its citizens, especially those studying in the country.

The federal government through the federal ministry of foreign affairs had said on Friday, February 25, that it will be dangerous evacuating Nigerians from Ukraine when the country had shut down its airspace. This followed the Save Our Souls message sent out by the National Association of Nigerian Students in Ukraine. The minister of foreign affairs, Geoffrey Onyeama had said that the government was concerned about the safety of Nigerian students, but said it would be very risky to evacuate them when the airspace is shut.

Amid the invasion of Ukraine by Russia, some Nigerians have shared their thoughts over the plight of citizens trapped in the European country. Speaking with the news correspondents, a Nigerian in Ukraine has expressed concern over their predicament, saying despite the current situation in Ukraine, he is unwilling to return to Nigeria at this point.

He further added that he is concerned about the current insecurity in Nigeria.

‘’ Where are they evacuating us to? From pillar to post? Is it not better to stay in Ukraine than to return us to Nigeria where the worse form of crisis is going on?’’

“The attention of the world is on Ukraine, and I feel safe here than returning home amid kidnapping, banditry, economic hardship and others. There is crisis of hunger and poverty in Nigeria, and that is more terrible than a physical war. “If I’m leaving Ukraine for now, it’s definitely not going to be to Nigeria. There are options of evacuating to Poland or other countries.

However, it’s yet known if the stranded Nigerians would be returned to the country or would be kept temporarily in Poland.