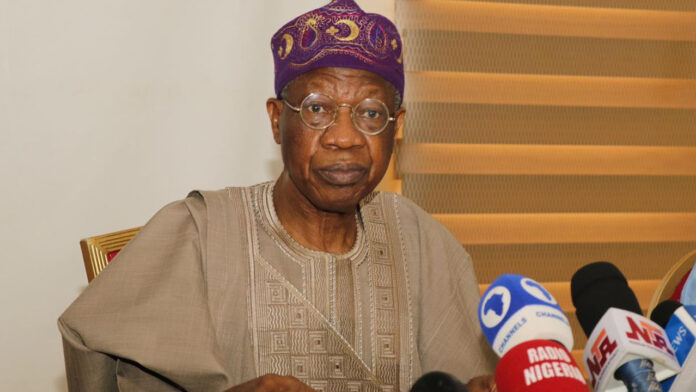 Alhaji Lai Mohammed, The Minister of Information and Culture, has called on investors from France and across the globe to invest in the nation’s new oil.

The minister who made the call at the Nigeria international Partnership Forum in France described the nation’s entertainment sector and Tv market as “Nigeria’s new oil with 24 million Tv households and the largest in Africa’’.

The News Agency of Nigeria reports, the event attended by President Muhammadu Buhari and business moguls from Nigeria and France was organised to spotlight Nigeria’s immense trade and investment opportunities

Mohammed said Nigeria is the Africa music and entertainment capital and has the continent’s largest TV market with high growth potential.

He said with the ongoing Digital Switch Over (DSO) there were potential for investments in the manufacturing of Set-Top-Boxes, content provision and requisite technology.

“Moving from analogue to digital television broadcasting means we will have more channels and more contents,

“The Nigeria Tv market has about 100 million subscribers in the rural areas and also about 98 million in the urban settlement. while the annual Tv subscription revenue is about 80 million US Dollar

“The advert spent as at 2020 is about 490 million USD and as digital transformation is ongoing we are looking at 1.47 billion advert revenue,’’ he said

He said Nigeria is projected to be the fastest-growing media and entertainment market in five-year times with a 12.1 compound annual growth rate.

According to him, the market growth is currently driven by subscription revenue which accounted for 72.26 per cent, while TV advertising accounted for 21.3 per cent.

“This is what exactly we want to change with DSO because, only about two or three companies in Nigeria today are involved in a subscription while we have hundreds of Tv stations, producers writers and Directors.

“We want to revise it to ensure that about 70 per cent of our revenue will come from content producers Directors and content owners while subscription will take about 30 per cent,’’ he said.

Mohammed described Nollywood and Nigerian music industry as the pride of the continent.

According to him, Nollywood is the second-largest TV in the world creating about 2000 movies annually while music industry alone in 2020 generated 7.7 billion US dollars.

The minister reiterated that the Nigerian economy is prepared and waiting for investors and the global investors should take the advantage of the creative and Tv sectors.

to invest in the 24 million TV households, improve our contents and the same time we will triple

Fielding questions from the audience the minister reiterated the government position that twitter was never banned but the operations of the microblogging site was suspended for allowing the platform to be used by secessionist and those who wanted to destabilise the country.

He said the correspondence between the government and Twitter had reached an advanced stage and the issue would be resolved in a mutually beneficial manner to both Twitter as a company and Nigeria as a country.