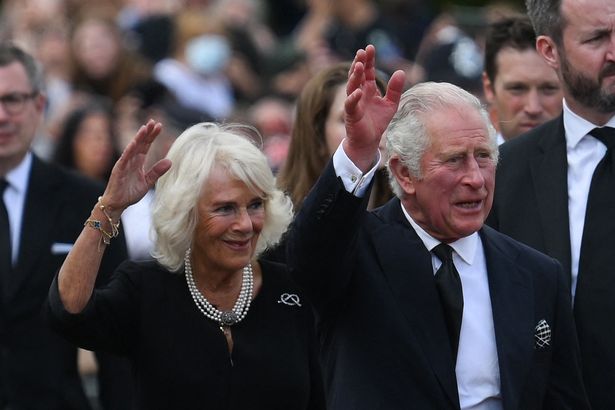 In his first address to the nation as King, Charles III said William will now take on the “responsibilities” which he has undertaken for more than 50 years – as well as sending his love to Harry and Meghan

In his address, the King said: “Queen Elizabeth was a life well lived; a promise with destiny kept and she is mourned most deeply in her passing. That promise of lifelong service I renew to you all today.”

His Majesty referred to the new roles and titles now given to members of the family, confirming Camilla would serve has his Queen Consort.

On William and Kate, he said: “As my Heir, William now assumes the Scottish titles which have meant so much to me.

“He succeeds me as Duke of Cornwall and takes on the responsibilities for the Duchy of Cornwall which I have undertaken for more than five decades.

“Today, I am proud to create him Prince of Wales, Tywysog Cymru, the country whose title I have been so greatly privileged to bear during so much of my life and duty.

“With Catherine beside him, our new Prince and Princess of Wales will, I know, continue to inspire and lead our national conversations, helping to bring the marginal to the centre ground where vital help can be given.

Ending his first speech as King, he poignantly paid tribute to the Queen, adding: “And to my darling Mama, as you begin your last great journey to join my dear late Papa, I want simply to say this: thank you.

“Thank you for your love and devotion to our family and to the family of nations you have served so diligently all these years.

“May ‘flights of Angels sing thee to thy rest’.”

The King and Queen Consort stayed in Scotland last night along with other members of the royal family, including Princes William and Harry.

After arriving back at Buckingham Palace, Charles took time to meet and shake hands with members of the public.

In a statement to the public released shortly after the Queen’s death, he said: “The death of my beloved Mother, Her Majesty The Queen, is a moment of the greatest sadness for me and all members of my family.

“We mourn profoundly the passing of a cherished Sovereign and a much-loved Mother.

“I know her loss will be deeply felt throughout the country, the Realms and the Commonwealth, and by countless people around the world.

“During this period of mourning and change, my family and I will be comforted and sustained by our knowledge of the respect and deep affection in which The Queen was so widely held.”

Earlier today, Prince Harry was seen leaving Balmoral and boarding a plane back to Windsor. He was photographed being comforted by airport staff in high-vis jackets as he boarded the BA plane. He has since landed at Heathrow.

Buckingham Palace has announced a period of national mourning which will run until seven days after the Queen’s funeral.

The date of the funeral has yet to be confirmed, however it’s expected to be the week after next.

The palace said on Friday morning: “Following the death of Her Majesty the Queen, it is His Majesty the King’s wish that a period of royal mourning be observed from now until seven days after the Queen’s funeral.