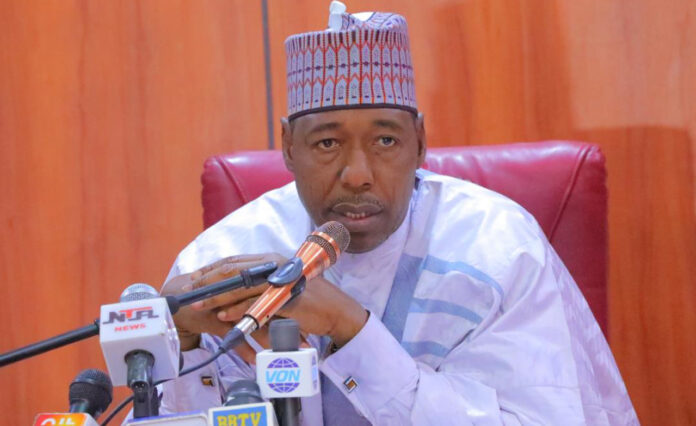 Governor of Borno State, Prof Babagana Zulum has commended the efforts of President Muhammadu Buhari over his vehement fight against Boko Haram insurgency in his state and North-East region as a whole.

He lamented the attempts of the terrorists to destroy the 23-year-old democracy in Nigeria, but hailed that personnel of the Nigerian Army have stood their ground to repel them.

The governor also saluted Nigerian people and volunteers across the country that have helped in combating the 13-year-old strongholds of terrorism.

The statement reads: “It is now 23 uninterrupted years since Nigeria returned to democratic rule back in 1999. In those 23 years, societies across the country have witnessed different levels of progress and challenges.

“In those 23 years, the people of Borno State and other parts of the northeast, have since July 2009, ceaselessly resisted groups of extremely violent insurgents with the determination to wreck massive havoc on communities, pursuing the ultimate objective of bringing down democratic institutions in Nigeria, and replacing them with violent sovereign doctrines.

“From 2009 to date, which is about 13 years, thousands of our youthful fellow citizens, amongst them women and even old men, have devoted their lives to supporting armed forces in fighting Boko Haram and stopping the insurgents from undermining Nigeria’s sovereignty and our democracy.

“In these 13 years, countless number of these citizens as members of ‘Civilian JTF, hunters and vigilantes, have made sacrifices including giving their lives at battle fronts, to protect fellow citizens and to preserve our nation’s sovereignty and democracy.

“These fallen volunteers alongside those currently in front lines and all citizens of the northeast eminently qualify to be named amongst the heroes of Nigeria’s 23 years of uninterrupted democracy.

“We will forever be grateful to the volunteers for their sacrifices just as we should regularly remember them in our prayers as we seek end to the insurgency that is now on comparative decline.

“Survivors of our fallen volunteers have earned our help as a matter of obligation to them.”

It continues: “We should also sustain our demonstration of love and support to fellow citizens who are still displaced even as government remains committed to safe and dignified resettlement that is ongoing.

“For our armed forces whose gallantry inspired our volunteers in the first place, we remain forever in their debts and we will continue to support them in any way that we can. We must also keep them in our prayers for their victory means our continued existence.

“We are grateful to Mr. President, Commander in Chief, Muhammadu Buhari for his sincere and undivided commitment in the fight against Boko Haram in Borno and rest of the northeast. The successes recorded are evident in our ongoing safe rebuilding of communities and safe resettlement of over 20 communities so far in Borno State, and I believe, in other parts of the northeast.

“May God bless the Federal Republic of Nigeria and may our democracy be of endless benefit to all Nigerians.”