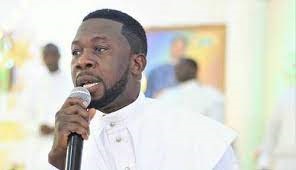 Head of Genesis Parish of the Celestial Church of Christ in the Alagbado area of Lagos, Prophet Israel Ogundipe aka Prophet Genesis, has said he will vote for the presidential candidate of the All Progressives Congress (APC) Bola Tinubu because he is Yoruba.

The controversial cleric made the statement during a service in his church on Sunday.

Genesis said he is not a “bastard” therefore he cannot vote for an Igbo person when there is a candidate who is from the Yoruba extraction on the ballot.

“I vote for Tinubu, I support Tinubu. You like it or not, I don’t care,” the preacher roared. “You know me I am not afraid. You know why? Because if I see another Yoruba person I will support, that (Tinubu) is the only Yoruba person I’m seeing. I am not a bastard, I cannot be a Yoruba and vote for Igbo. I’m not afraid.”

Genesis added that he was not speaking to get Tinubu’s attention.

“I’m not eating from Tinubu’s money, I’m not asking him for money and I will never ask him for money. I don’t need his help God is my helper,” he said.

Last month, Genesis publicly accused another cleric Rev Mother Esther Ajayi of abandoning him while he was in custody.

Genesis was in 2021 convicted and sentenced to jail for defrauding a London-based architect and converting her property for personal use.