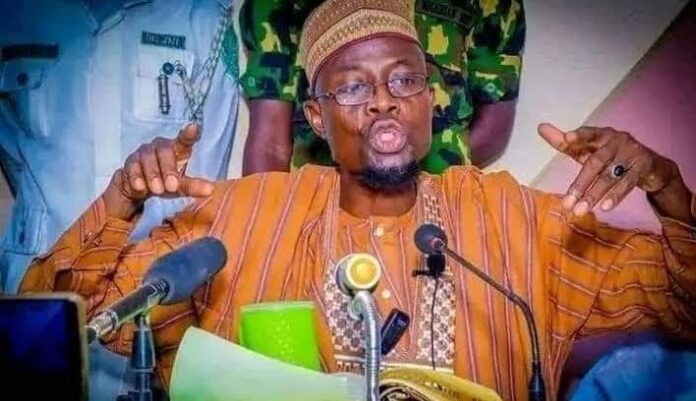 John Gabriel, the soldier who is accused of killing popular Yobe cleric, Goni Aisami, on Wednesday, open up to journalists how he committed the crime.

Mr Gabriel told journalists at the Yobe Police Command that he went to the checkpoint to steal.

He confessed to killing the cleric with a gun he hid inside a folded military camp bed after the cleric gave him a lift to Jaji Maji, in the Karasuwa Local Government Area of the state.

“We were approaching Jaji-Maji, so I told him (the cleric) that I was hearing a sound under the vehicle and he said he was suspecting something under it and he wanted to park and check,” the soldier attached to the 241 Recce Battalion said.

“After he parked by the roadside, he checked around and I followed him. After checking, he found out that it was not what he suspected.

”Meanwhile, I had removed my rifle and fixed the magazine when he was under the vehicle. When he didn’t find anything under the vehicle, I told him to check the back tyre, he consented, and while doing so, I pointed my rifle at him and he asked me, ‘What did I do to you?” And I responded you did not do anything to me. He asked further, ‘Do you want to kill me?’ And I said, ‘No I don’t want to kill you.’ So, he kept quiet and I fired a warning shot, thinking he would be scared and run away. But he didn’t run away. However as he made to enter his vehicle, I fired directly at him,” he said.

The police said following the investigation, the suspect and his accomplice, Adamu Gideon, will be in court.

According to source the soldier was arrested for allegedly killing the Islamic cleric after he was redeployed for allegedly stealing N480,000 belonging to his commanding officer.

He was interrogated as the prime suspect in the theft of N80,000 and N400,000 on two occasions before he was redeployed to the checkpoint.

The soldier was the orderly of the battalion commander, GS Oyemole, a colonel before he was asked to leave sometime in July because of his dubious character.

“The commanding officer had to redeploy him because he could not establish any evidence of stealing but he cursed him and told him that if it’s his character he would meet his end,” he added.

“Ironically, the day the Commanding Officer, Mr Oyemole handed over to a new commanding officer, Mr Gabriel was arrested for killing the Islamic Cleric,” the source in the army revealed.

Mr Gumi asks the military to sanitise its recruitment process.

Meanwhile, popular Kaduna-based Islamic cleric, Ahmad Gumi, on Wednesday asked the military to flush out criminals in its ranks.

The cleric, who was reacting to the killing of the Mr Aisami, said the military should also sanitise its recruitment process to avoid recruiting persons with dubious characters.

“There is need for the security apparatus to flush out the moles in its rank and files. Their action is apparently armed robbery.

“So, the security apparatus should not deny the presence of criminals in its ranks. Armed robbers, gun runners, drug pushers, rapists, and murderers, just name it, we have men in uniforms committing these crimes,” Mr Gumi said.

“It’s easy for these criminals to get admitted into the forces because of corruption associated with such conscription. The situation is alarming, with two hundred thousand Naira and above; almost anybody can confidently get an offer into our security apparatus. There is an urgent need to put a check and balance system to check these detestable occurrences.

“To avoid these ugly encounters, the armed forces and police should review all personnel to ascertain their guarantors are genuine, and in the future, any guarantor should be accountable for the actions of his guarantee.

“Every soldier should have the sanction of a recognised traditional leader or an established clergy besides the required civil servant or member of the armed forces as referee.

“And until the forces flush out these criminals, we are yet to see the end of these atrocities committed by the unscrupulous elements of these forces,” Mr Gumi said.