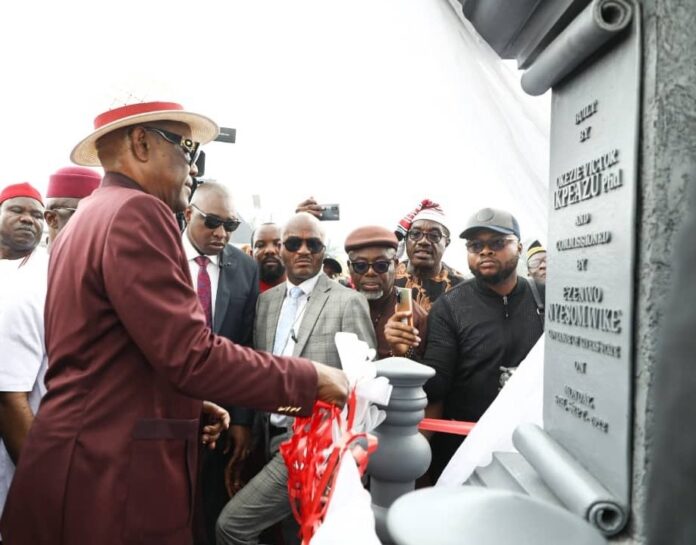 The Governor of Abia State,  Dr Okezie Ikpeazu  has finally delivered the flyover at Osisioma and named it Okezuo Abia Flyover after five years.

The flyover, which was inaugurated yesterday  is  the first in the 31-year history of Abia and initially  elicited a lot of excitement because of its historical significance.

However, after waiting for  years without its completion the excitement evaporated. The project became a source of mockery for the Ikpeazu administration as Abia people nicknamed it ‘centre table’.

But Ikpeazu, exhibiting a high sense of accomplishment invited his Rivers State counterpart, Governor Nyesom Wike to inaugurate both the flyover and the rehabilitated Aba-Owerri road.

The Abia governor described the flyover as a legacy project which he initiated to boost trade and commerce in Aba as it would decongest traffic in and out of the sprawling commercial nerve centre.

He also hinted that the flyover and other projects are already executed by his administration would be used as campaign, warning that no politician would allowed to paste posters on his projects.

“This is the time of politics. If you want to contest an election in Abia, you must show us what you’ve done before. From your family show us your work. Don’t paste posters on my flyover, streetlight and projects. Place your posters on your projects, not on my own projects,” Ikpeazu
said.

It was also the turn of Ikpeazu to mock his critics who did not believe the flyover would become a reality given the speed and number of such projects springing up in neighbouring Rivers and Ebonyi States.

The Abia chief executive, who has become close friend and ally of  Wike, explained that he invited his Rivers counterpart to inaugurate the project because he is the father of flyovers in Nigeria and understands the value.

Wike commended Ikpeazu for changing the developmental narratives of Abia, saying that he was proud to be associated with the Abia governor.

“I don’t associate myself with those who can’t show anything. Ikpeazu is a man that knows what to do for his people. This is why I said anywhere Ikpeazu is, I’ll go with him.

“I and Ikpeazu have come a long way. No relationship can be bought with money. People don’t understand the modus operandi of what we’re doing. If you like go and meet Seyi Makinde, Ifeanyi Ugwuanyi and Samuel Ortom, nothing can change. We’re together.”

The Rivers governor, who has become a thorn in the flesh of the national leadership of the main opposition Peoples Democratic Party (PDP), as well as the ruling All Progressives Congress (APC) took a swipe at his traducers, especially the PDP  national chairman, Senator Iyorchia Ayu.

He said: “They said Abia State Governor is a boy, Wike is a boy, Ortom, Ugwuanyi and Seyi are boys, but see what the boys are doing. Let them as men show us what they’re doing.

“They hate us because we’re standing on an agreement. We’re only asking for a proper share of our political positions and they hate it. Don’t bother about abuse on me. If they like let them abuse me anyhow but we’ll know who’s relevant at the appropriate time.

According to Wike, “politics is about delivering at the appropriate time (hence) when the jungle matures, we’ll know those who have the capacity to say this is where our state will be, adding that Abia governor “has the capacity.”

He acknowledged that “politics is all about propaganda” and that he enjoys the dust of controversy that swirls around him, confessing that whenever “I wake up in the morning and nothing has been said about me, I’m not happy.”

Earlier the state commissioner for works, Mr. Bob Ogu, disclosed that the flyover, which government officials erroneously refer to as “interchange” was conceived by Ikpeazu as soon as Ikpeazu assumed office in 2015 but its construction started in 2017.

He said that he was happy that Governor Ikpeazu’s dream of giving Abia its first flyover has materialised. He congratulated all Abians on the ‘feat’ achieved by their governor.