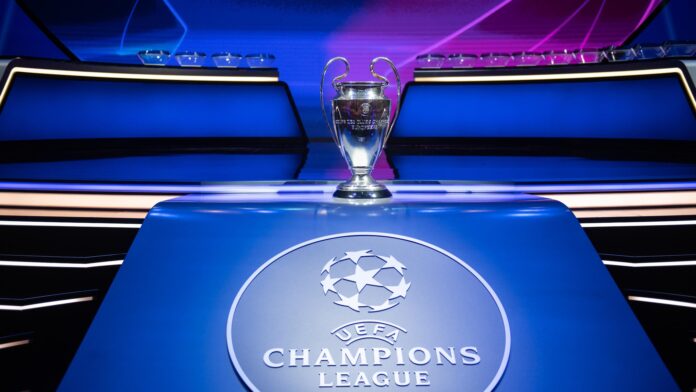 The Champions League is back and the first night of group stage action didn’t disappoint.

There was a huge shock in the early kick-offs, some dominant wins for the favourites, and the first use of semi-automated offside calls.

Here’s a roundup of Tuesday’s action.

Chelsea’s bid to win a third Champions League title got off to the worst possible start with a surprise 1-0 defeat at Dinamo Zagreb.

But the Blues were beaten by a swift Dinamo counter attack, with Bruno Petkovic’s deft flick on for the lighting quick Mislav Orsic leaving Wesley Fofana and Kalidou Koulibaly in the dust, with the forward dinking over Kepa Arrizabalaga.

Chelsea improved after the break but failed to create a chance of note as Dinamo held on for a hard-fought victory.

AC Milan will have been disappointed to have only drawn 1-1 away at Austrian champions Salzburg.

Stefano Pioli’s men finished bottom of their Champions League group last season and missed a real chance to put some distance between themselves and Chelsea early on this campaign.

A moment of magic from Noah Okafor gave the hosts a first-half lead. Fernando robbed Ismael Bennacer of possession and slipped through his Swiss strike partner, who nutmegged Pierre Kalulu and slotted past the onrushing Mike Maignan.

The Rossoneri were back on level terms shortly before the interval when Rafael Leao led a quick breakaway, with Olivier Giroud leaving his cross for Alexis Saelemaekers to slam home.

Fernando and Divock Origi twice went close in the second half while Leao’s deflected effort smacked the upright deep into stoppage time as the spoils were shared.

Celtic were made to rue several missed chances as Real Madrid punished them at Parkhead.

Ange Postecoglou’s side created several big opportunities to break the deadlock and were handed an advantage when Karim Benzema had to be withdrawn with injury.

But Los Blancos took the lead just after half-time when Federico Valverde’s driven cross was steered in by Vinicius Junior.

Shakhtar Donetsk stunned RB Leipzig at the Red Bull Arena to take top spot in Group F at the end of matchday one.

Goalkeeper Peter Gulasci gifted Shakhtar an early lead when he was caught in possession by Maryan Shved, who was able to put the ball into an empty net.

Leipzig grabbed an equaliser when Mohamed Simakan beat Anatolii Trubin at his near post, before Shved secured his brace immediately from the resulting kick-off to restore the Ukrainians’ lead.

Marco Reus was first on the scoresheet at the end of a well-worked team move involving Niklas Sule and Julian Brandt, sweeping past goalkeeper Mat Ryan.

Reus was involved for Dortmund’s second soon after, setting up Raphael Guerreiro to slip away from Kobenhavn’s backline and play a neat one-two with Gio Reyna around Ryan to double the lead.

Jude Bellingham added’s Dortmund’s third with seven minutes remaining, before a Rasmun Falk goal for the visitors was ruled out by VAR’s new semi-automated offside system.

The Norwegian’s first goal of the evening came after tapping in a wicked Kevin De Bruyne cross after just 20 minutes.

City had to wait until just before the hour mark to grab their second. Phil Foden managed to weave his way past Nemanja Gudelj and find the bottom corner.

Foden then had a shot saved from Bono, who parried the effort straight into the path of a grateful Haaland to secure his brace.

Sevilla’s night went from bad to worse as Ruben Dias was quickest to a low Joao Cancelo cross to notch City’s fourth.

Paris Saint-Germain came out on top in the glamour tie of the evening, beating Juventus 2-1 at Parc des Princes.

Kylian Mbappe found the back of the net after just five minutes when Neymar flicked the ball right over the top of a stunned Juve backline, with his French forward partner smashing into the far corner.

The 23-year-old secured his brace soon after with a similarly ferocious effort, with Achraf Hakimi this time playing provider.

Massimiliano Allegri’s men threatened to make a game of it after the break when Weston McKennie nodded in a Filip Kostic cross, but the Bianconeri failed to create much more and fell to defeat.

Benfica have now won all ten of their matches so far this season, with their latest coming against Maccabi Haifa.

After a tough and turgid first half, Rafa Silva broke the deadlock just after the break, volleying home at the front post from a clever Alex Grimaldo cross.

Grimaldo then added Benfica’s second minutes later with one of the goals of the season, curling past Josh Cohen from 30 yards to give the hosts a comfortable lead to ride out.