Give us equal treatment as NUT, NASU charges FG 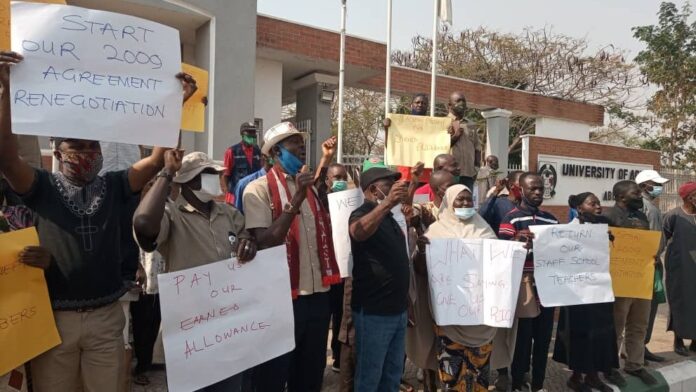 The Non-Academic Staff Union of Educational and Associated Institutions (NASU) on Monday, 22nd March, 2021 embarked on a 3-day sensitization and advocacy campaign for enhanced welfare package for her members.

Speaking at Lagos State government house, the secretary of Lagos State Chapter of NASU, Comrade Adetunji Ademisoye recalled that on the 5th of October, 2020, His Excellency, President Muhammadu Buhari, through the Honourable Minister of Education, Malam Adamu Adamu at the 2020 World Teachers’ Day Celebration held at the Eagle Square, Abuja, announced incentives for Teachers in Public Basic and Secondary Schools in Nigeria which includes extension of the retirement age of Teachers from 60 to 65 years and the years of service from 35 to 40 years, with enhanced special salary scale and allowances.

He further said that the Federal Executive Council at its meeting of Wednesday, 20th January, 2021, gave approval to the incentives, while the Honourable Minister of Education announced at a Press Conference that a Bill titled “Harmonized Retirement Age for Teachers in Nigeria Bill (2021) would soon be transmitted to the National Assembly in order to be enacted into law”.
Emotion-laden, Ademisoye narrates that unfortunately, the Non-Teaching Staff in the schools system were excluded from the afore-mentioned gestures. Saying that members of the Non-Academic Staff Union of Educational and Associated Institutions (NASU) in the Schools and Colleges in Nigeria applaud this good gesture of Government, and wish to remind the government that Teachers are not the only workers in schools.
Ademisoye hints that Teachers work with diverse range of Non-Teaching professionals and support personnel in order to achieve the set goals. The Non-Teaching staff in the Basic and Post Primary Schools possesses requisite certificates and complement the teaching staff, therefore, that the interest of NASU should be accommodated by government in the ongoing reforms.
In the peaceful advocacy rally to the governor of Lagos State, Mr. Babajide Sanwo-olu, the Speaker of Lagos State House of Assembly, Rt. Hon. Mudashiru Obasa and other requisuit agencies, NASU’s demands includes, that the federal and state governments should put an end to all discriminatory indusgtrial relations practices against the Non-Teaching staff in the Primary and Post Primary Schools system; that the federal government should include the Non-Teaching staff in the approved Special Teacher Pension Scheme to guarantee better welfare for them in retirement and also extend their retirement age to 65 years and length of service to 40 years.

NASU further demands that the federal and state governments should as a matter of deliberate policy do everything possible to motivate all workers in the education sector irrespective of their profession and job description; that government should put in place training programmes for Non-Teaching Professional staff with a view to enhancing their productivity, and that the federal government should make provision for loan facilities, such as agriculture, housing, cars, motorcycles, etc, to support Non-Teaching staff earnings to enhance their welfare.