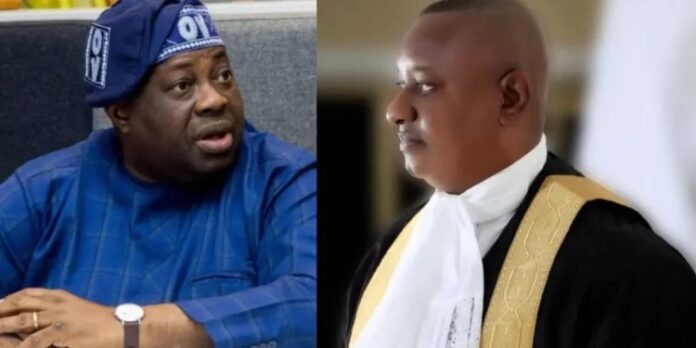 The Director of Communications for the Peoples Democratic Party Presidential Campaign Council, Dele Momodu, replies Festus Keyamo saying “For me, his biggest sin is the fact that he went funereally quiet when APC became a totally hopeless case, just because he’s hoping to inherit Buhari’s structures”.

I have just read Festus Keyamo’s response to my critique of the APC Manifesto of lies. I’m not surprised that all he could do was yell as usual without examining or practically addressing the content of my article. Unfortunately, he picked on a wrong customer.

Let me take a few minutes to educate this young friend of mine who has since become a shadow of his old self since he was offered an appointment, that makes him look so incompetent, by President Muhammadu Buhari. Any self-respecting soul would have since resigned but Festus Keyamo was not at home the day shame came visiting. The Ministry in which he’s a mere figurehead is in total shambles and only a Bola Tinubu would have given the job of a spokesperson to such a certified nuisance.

What did Festus say I did wrong? He quoted copiously from an article I wrote about two years ago, which the Tinubu media teams have been using to campaign endlessly, because they have no stronger voice of their own. I’m indeed flattered.

There is no doubt that I love Tinubu the Man but I disagree vehemently with Tinubu the Politician. This is not the first time I will say it publicly. Since I now have the opportunity of presenting the bones of my disagreement with Tinubu, courtesy of Festus Keyamo, I will lay them bare.

Tinubu has declined in the last few years. I used to see him as a man of his people but no supposed generalissimo would ever abandon his people in the days of trouble and tribulation. None of the people around him could tell him the truth for pecuniary reasons. He knows it himself but he desperately wants to be President of Nigeria, by fire by force, after he has lost most of his formidable foot soldiers, and now relying on outsiders to activate and actualize his lifelong ambition for him, which is his legitimate right. But Nigerians have the right to scrutinise his action plans.

When he was Governor, I supported him from the distance while he surrounded himself with some people who pretended to love him. When he was busy distributing land to journalists in Lagos, I refused to collect my papers because I love my freedom, the reason I was able to tell him truth regularly.

When he was to be impeached for some infractions, and many of his so-called loyalists were washing off their hands clean, like the Biblical Pontius Pilate, my very dear friend, Tokunbo Afikuyomi, stood by him like the Rock of Gibraltar. But how did he repay Tokunbo who took all the bullets? This shameless Festus Keyamo was one of those who wanted to run Tinubu out of town. Nduka Obaigbena and I had to step in at some point before he could consider Tokunbo for anything. Tokunbo had wanted to be the Governor of Lagos State and Tinubu goaded him on and allowed him to waste his resources. It was when I got Chief Harry Akande to give Tokunbo the ANPP Governorship ticket for Lagos State that Tinubu suddenly realised he had offended his “suicide bomber!”

During his battle to stop Dr Abubakar Bukola Saraki from becoming the Senate President, we all saw how the younger politician outsmarted him. I had warned him to leave the gentleman alone because no one should play God, but he went ahead until the gentleman floored him effortlessly. During his egoistic battle against Governor Babatunde Raji Fashola, I wrote an article asking him not to try it because their marriage was consummated in heaven. Somehow, he backtracked. In spite of him, Fashola continues to remain relevant in Nigerian politics.

Again, when he continued his tradition of “hire-and-fire” and started plotting against Governor Akinwumi Ambode, I buried my love for Babajide Sanwo-Olu, to speak up against the injustice of removing a great technocrat who was doing well in Lagos. The President of Nigeria, the Vice President, the Governors’ Forum and many distinguished Nigerians begged him to no avail. He must have his way always. The same personalities are now the people he needs and wants to make him President. Nigeria is looking for a President, with compassion and competence, not an Emperor!

For me, his biggest sin is the fact that he went funereally quiet when APC became a totally hopeless case, just because he’s hoping to inherit Buhari’s structures.

Lastly, I hope he would have the energy to make himself available for a rigorous scrutiny of his Manifesto. He wants to renew what actually? He wants to turn Nigeria into another Lagos? Many of those who love him genuinely know that the demystification process has started. They wished he had not subjected himself to this agony and anguish. But they can only say so in hushed whispers. Nigerians deserve better. I have been actively involved in politics. I hope Keyamo does not delude himself that I cannot make my own choices. I certainly have, and done so openly boldly. Atiku Abubakar is my choice. He is not a pretender to the throne. He has pursued his dreams with grace, good comportment, self-discipline and uncommon equanimity.

Festus and his gang keep quoting a 2019 article that I wrote. They should go and frame my other writings too. As for that political neophyte called Keyamo, he still has a lot to learn while trying hard to be a lap-dog. He should be reminded that he is still a Minister of State of the Federal Republic of Nigeria, paid at tax-payer’s expense. He should learn to moderate his undue exuberance.

I could go on ad infinitum but let’s cool temper for now.