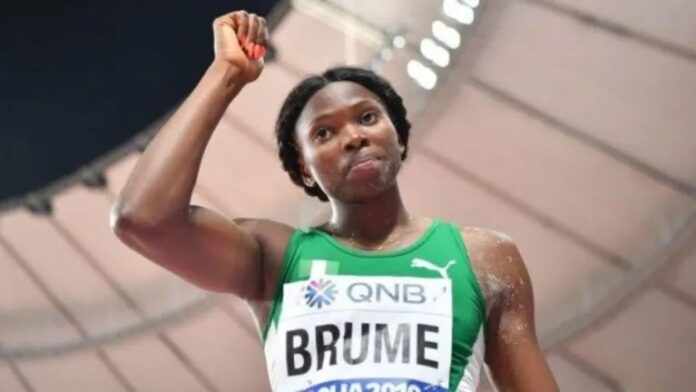 Nigerian athlete Ese Brume has come third in the women’s long jump at the 2022 Palio Citta in Rovereto, Italy.

It was Brume’s first action back on the field since reclaiming the Commonwealth Games title in Birmingham.

Brume finished third in the contest, jumping a mark of 6.53m on her fifth attempt. Milicia Gardasevic won the event, leaping a mark of 6.78m, while Jasmine Sawyers jumped 6.73m to secure second spot.

The Palio Città della Quercia is an annual track and field meeting held at the Quercia Stadium in Rovereto, Italy. Usually held in late August or early September, it is a European Athletics premier meeting. It is the oldest international athletics meeting in Italy, having been first held in Rovereto in 1965.

Brume’s 6.53m jump is a distance away from her record setting jump of 7.00 at the Commonwealth Games.

The previous Games record for the women’s long jump was 6.97m set by Australia’s Bronwyn Thompson on home ground, Melbourne, in 2006.

Brume announced herself to the world in 2014 by winning gold as an 18-year-old at the Commonwealth Games in Glasgow but could not defend her title four years ago in the Gold Coast in Australia.

However, since then, she has been on a consistent run, winning bronze at the World Athletics Championships in Doha in 2019. She followed that up by winning another bronze at the Tokyo 2020 Olympics.

Her friend and world record holder Tobi Amusan was beaten in the women’s 100m hurdles at the Lausanne Diamond League.