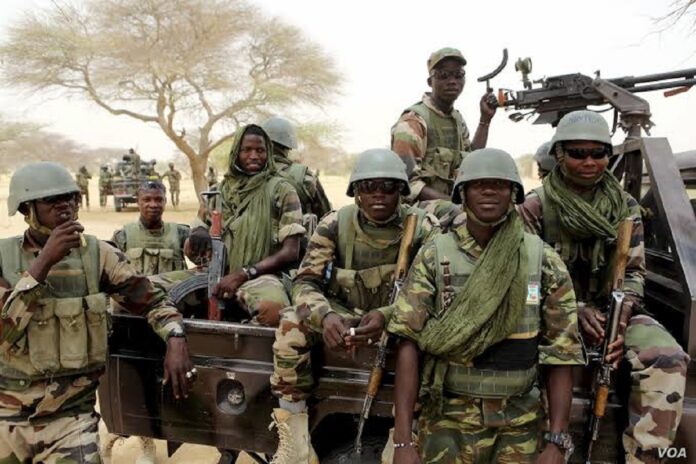 The Nigerian Army, 81 Division, on Tuesday started a two-day workshop to educate officers on Human Rights and Humanitarian Laws to boost the image of the security group.

Maj.-Gen. Lawrence Fejokwu, the Division’s General Officer Commanding (GOC), who spoke at the opening of the workshop in Lagos, said that the training would help to support the strategic vision of the Chief Of Army Staff (COAS), Gen. Leo Irabor.

The sensitisation workshop was took place as a fallout from the events of the #EndSARS protest in 2020.

Fejokwu, who spoke through his Chief of Staff, Brig.-Gen. Nsikak Edet, said that the COAS vision was to build a Nigerian Army repositioned to professionally defeat all adversity in a joint environment.

“For instance, the case of EndSARS which we handled as a Division brought about a lot of issues bothering on proper management of social media space.

“So, this lecture will instill high quality character on how officers should comport themselves when on duties.

“People are watching, taking videos and recording and this can be used against such an officer in a negative form,” he said.

The GOC said that officers would be educated on how to ensure that their troops do not take and send unauthorised videos, recordings or pictures to the wrong set of people.

“So many photographs that are not supposed to be on the social media space are there and some of them were taken by our own troops.

“So, it is necessary to ensure that when conducting operations, officers should not be allowed to do the things that can jeopardise the instinct of the strategic directive of the command.

“Such an officer will be arrested, investigated and court martialed when caught,” he warned.

Fejokwu further said that another key lesson to be learnt from the protest would be the legal status of a soldier and the justification of the use of force.

According to him, a soldier should know when to use force and the degree of the kind of force to be applied to conform with the principle of use of minimum force.

“One of the principles of the international security treaty is the use of minimum force.

“So, the troops need to know how to apply force, what will make them apply that excessive force or minimum force as the case may be.

“Therefore, the officers and soldiers will be sensitised on these laws to guide them in all their operations to work in accordance with the law,” he said.

The Division’s Training Officer, Brig.-Gen. Shuaibu Nuhu, said that the workshop would educate officers on the importance and challenges of having a next of kin.

Nuhu said that there had been cases where at the demise of an officer dies in the course of duty, several family members would come to claim the officer’s benefits.

“The workshop, therefore, serves as a platform to educate on professionalism, responsiveness in the Nigerian Army through appropriate awareness of human rights and humanitarian laws.

“We want to make sure that everything we do is transparent by engaging our officers to have mastery of the laws so that they will not take laws into their hands,” Nuhu added.