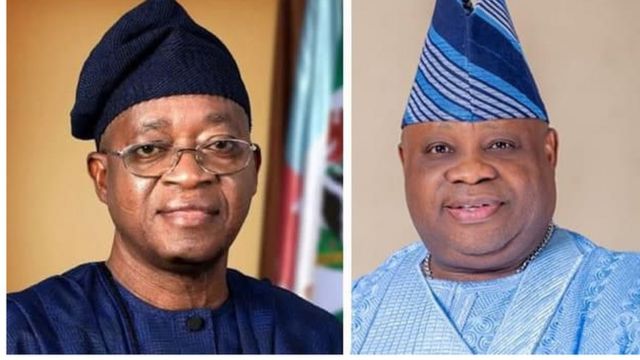 The Ademola Adeleke Transition Committee has clarified that granting an order of substituted service is a normal process provided for within the Nigerian legal jurisprudence.

Reacting after the sitting of the Osun State Governorship Election Tribunal on Monday where the panel granted the xe parte application filed by Governor Gboyega Oyetola and All Progressives Congress in the state for a substituted service on Adeleke, the media sub-committee chairman for the Transition Committee, Olawale Rasheed in a statement denied reports that the Governor-elect evaded court service.

Rasheed stated that, “Senator Adeleke is very much in Osun attending to transition responsibilities in preparation for his assumption of office in November. Filing and securing application for substituted service does not call for any jubilation as the processes are normal and allowed within the nation’s jurisprudence. It is part of the legal process for which litigants can avail themselves. It is neither an indictment nor a vindication of any actor within the adjudication environment.

“We must however admit that security around the Governor-Elect is expectedly tight since his declaration as the winner of the July 16 election. Ever since the incumbent was defeated, we suspect an agenda from the APC administration to engineer violence and turn round to blame the PDP. Access to the Governor-Elect is therefore highly restrictive.

“In a state where the administration cannot secure even themselves, those of us in the opposition should be worried. When the high level of insecurity appears to be state sponsored, we have sacred responsibility to secure ourselves and our Governor-elect.

“That is however not to say that Senator Adeleke is not accessible for court service. The granting of application for substituted service is a pathway to speed up service process and we wholeheartedly welcome the decision of the Tribunal”, Mallam Rasheed noted.

This is to further reiterate that the game plan of the APC about media trial of their petition is not unknown to the PDP and the Governor-elect, however, as a believer in the rule of law who has triumphed in many sponsored litigations against him in the past, Senator Ademola Adeleke remains fearless and undaunted, assuring the Osun electorate that the mandate freely given to him is irrevocable,” he said.