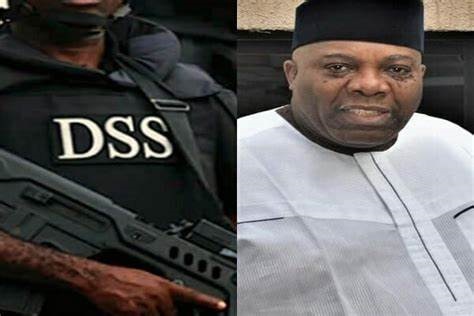 The Department of State Service has explained the reasons behind the rearrest of the immediate past Director-General of the Labour Party Presidential Campaign Council, Doyin Okupe, at the Murtala Mohammed International Airport, Lagos State, citing the cooperation of the Economic and Financial Crimes Commission as the mastermind for the interception.

The PUNCH, on Monday, December 19, 2022, reported that Okupe was sentenced to two and a half years imprisonment for breaching the Money Laundering Act.

According to the EFCC that engineered the arrest, Okupe was charged to court for receiving N702 million in illegal payment from public funds meant to procure arms to fight insurgency in 2019. He was convicted of the offence by the Federal High Court.

One of the charges read, “That you, Dr Doyin Okupe, being the Senior Special Assistant to President Goodluck Jonathan from July 2012 to May 2015 and being the Managing Director/Chief Executive Officer, and a signatory to the bank account of Abrahams Telecoms Limited, on or October 3, 2014, in Abuja within the jurisdiction of this honourable court, directly took possession or control of the sum of N35million, transferred to the account of Abrahams Telecoms Ltd from the account of the Office of the National Security Adviser with the Central Bank of Nigeria, purporting to be for special services when you reasonably ought to have known that the said fund formed part of the proceeds of an unlawful activity.”

Justice Ojukwu, in a judgment, held that Okupe, also the former Senior Special Assistant (SSA) on media to ex-president Goodluck Jonathan was found guilty of contravening Sections 16(1)&(2) of the Money Laundering Act, for accepting cash payments without going through a financial institution, in excess of the threshold allowed under the Act.

Reacting to his rearrest on Thursday at the Lagos Airport, the Public Relations Officer for DSS, Dr Peter Afunanya, said the former LP campaign DG was arrested after his attempt to leave the country for London.

“Doyin Okupe was intercepted by DSS at Terminal 1 of Murtala Mohammed International Airport, Lagos this morning at the instance of the EFCC,” Afunanya said in a text message sent to The PUNCH enquiring about his (Okupe) arrest.

“He has long been handed over to the commission which requested the action. Okupe was billed to fly to London via Virgin Atlantic.

However, one of Okupe lawyers, Tolu Babaleye, has reacted on Facebook bemoaning the arrest of his client.

Babalaye claimed that the DSS asked him to provide court processes where he paid the fine option following his money laundering conviction by the Federal High Court, Abuja.

“The reason according to the source is that he was asked to produce evidence that the Federal High Court Abuja has freed him from the case in which he was convicted and paid a fine to the knowledge of the whole world and was allowed to go home.

“When will this harassment stop? Who is after Dr Okupe? As of today, the man has no case to answer, I hereby demand that the DSS should release my client immediately as this is a violation of his freedom of movement, right to liberty and dignity as a human person. This is unfair as the man’s health is fast failing,” he wrote.