Casemiro breaks down in tears during Real Madrid farewell message. 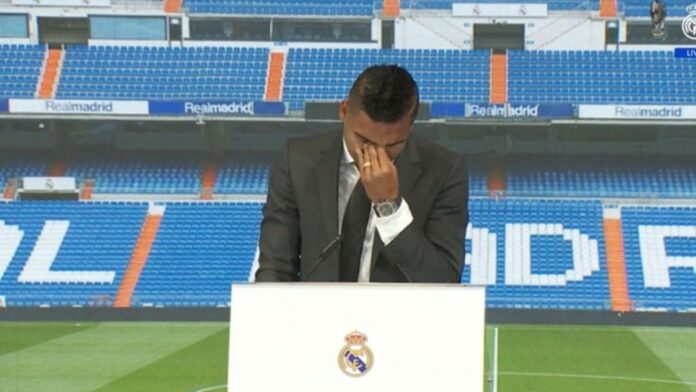 Manchester United new boy Casemiro broke down in tears as he bid farewell to Real Madrid after nine years at the club during a farewell press conference on Monday morning.

The Brazil international will now fly to Manchester to complete his £59.5million switch to the Red Devils and is expected to be paraded in front of the Old Trafford fans before kick-off in Monday night’s massive clash with Liverpool.

Casemiro first moved to the Bernabeu in 2013, becoming a mainstay in the side following an impressive season on loan at Porto, and helped Real win five Champions League titles.

While Carlo Ancelotti had been keen to keep the 30-year-old, Real are blessed with a plethora of excellent central midfielders and, given his service to the club, chose not stand in Casemiro’s way when United made their approach.

The Brazilian was given a chance to say goodbye at a press conference at Real’s Valdebebas training complex, with president Florentino Perez, manager Ancelotti and many of his team-mates all in attendance.

Casemiro shared an emotional embrace with his manager when he arrived and before he had even started speaking was wiping away tears with a tissue as he watched an incredible montage of his time playing for Real, with his wife also becoming very tearful.

Perez paid Casemiro a series of compliments in a heartfelt speech, describing the midfielder as one of Real’s ‘great leaders’ in their five Champions League wins and a ‘legend’ of the club.

When it came for the midfielder to speak he broke down in tears, barely able to get his words out, before reaching for another tissue and finally composing himself.

Good morning everyone. When me and my wife arrived here no one knew us. It was a new country and here we built our life and our family. I remember when I first received the Real Madrid call, I was so excited. When I left Brazil I knew I would have played at Castilla, I was very excited because I knew I would have learnt the values of this club.

I won a lot of titles but the biggest title is when I came here to train every day. I want to thanks everyone, my mother, my wife, this club, all the players and team-mates. Luka Modric and Toni Kroos… I can’t forget them! We won a lot together. I’m sure one day I’ll come back. I want to give back all the love Real Madrid gave me.