Casemiro giving No.18 shirt and to be unveil before Liverpool clash. 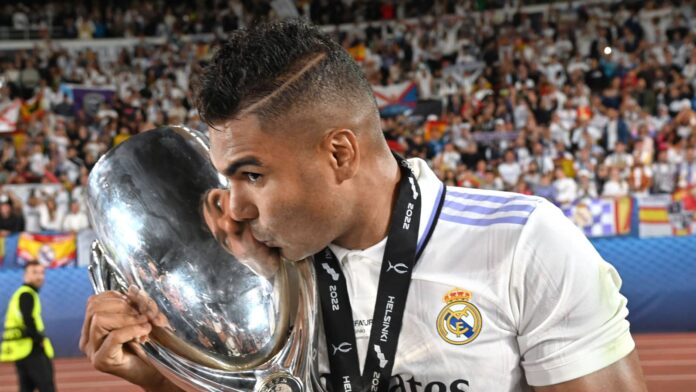 Manchester United will hand Casemiro the No.18 shirt while the midfielder will be at Old Trafford on Monday evening to watch their Premier League match against Liverpool, according to reports in Spain.

United are on the brink of completing their £59.5 million deal for the Brazil international, who is leaving Real Madrid having won 18 trophies with the Spanish club.

An agreement was reached with Madrid on Friday, however, visa issues have complicated United’s aim to unveil their new signing before their game against Liverpool on Monday.

According to Marca, United have now appeared to overcome those obstacles as Casemiro will say goodbye to Madrid supporters and teammates at a press conference on Monday before he travels to Manchester later that day.

The report claims that United will present Casemiro at Old Trafford on Monday evening and are aiming to complete the paperwork in order for the midfielder to be available for their Premier League match against Southampton on August 27.

It’s understood that United have also assigned Casemiro the No.18 shirt, which was vacated by Bruno earlier this summer.

United’s No.18 shirt was famously worn by Paul Scholes for the majority of his time at Old Trafford.

During his time at Madrid, Casemiro wore both the No.38 and No.16 shirts before sticking with the No.14 since 2015.

Speaking ahead of United’s match against Liverpool, Erik ten Hag admitted United’s lack of a defensive midfielder is one of the reasons for their poor start to the new Premier League season.