Buhari congratulates Nigerian student on winning AFS Award in US. 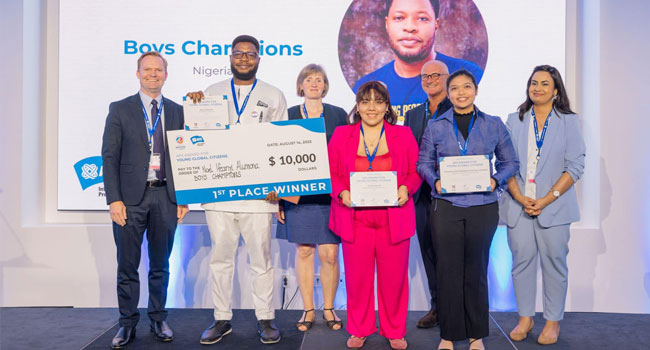 Noel Ifeanyi Alumona, who won the 2022 AFS Award for Young Global Citizens, is the first African to win the prize since its inception in 1914.

President Muhammadu Buhari has applaud Nigeria student, Noel Ifeanyi Alumona, who won the 2022 AFS Award for Young Global Citizens, and became the first African to win the prize since its inception in 1914.

The commendation was given via a press release signed by Femi Adesina, Special adviser to the President (Media & Publicity), on 22 August, 2022.

The award was presented to the Nigerian student during the International Youth Day organised by the United Nations Global Communications Department, the AFS Intercultural Programs and The Youth Assembly at the United Nations headquarters in New York.

President Buhari noted the responsiveness, kindness and sacrificial spirit of the Nigerian student, who is studying Special Education in Vanderbilt University, United States, and has already established foundations to cater for the needs of physically challenged, vulnerable and less privileged.

The president commended Mr Alumona for his outstanding character and dedication to helping others, particularly for attracting global spotlight to Nigeria, in recognition of his vigorous campaign to end violence against women and girls through proper orientation of boys on responsible behaviour.

President Buhari affirmed that the student, who is an Obama Foundation Fellow, United States Institute of Peace Fellow, and United Nations Youth Assembly Delegate, is on the right side of history, channelling his energy to encouraging and supporting others, and creating a framework for charity.

The president prayed that the Almighty God will continue to lead, guide and grant Alumona wisdom to serve his country and humanity.