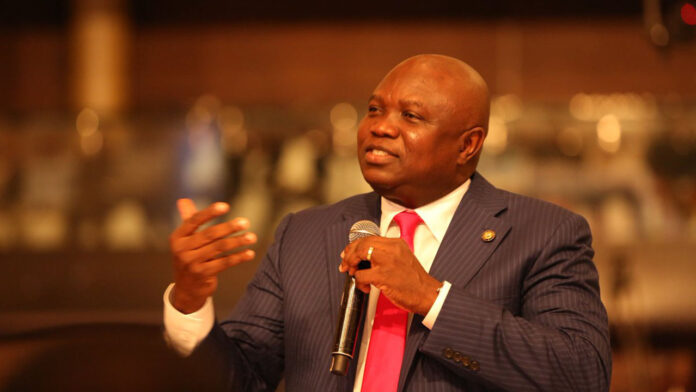 Former Governor of Lagos State, Akinwunmi Ambode has been appointed among 60 others to the APC 2023 Election Committee.

E247 reports that the appointment is Ambode’s first publicly announced position after he was booted out of office through primaries enroute the 2019 gubernatorial election of Lagos state which he (Ambode) lost to the incumbent Gov. Olusola Sanwo-Olu.

Fmr. Gov Ambode had been accused of anti-party activities which eventually led to his ouster through the primaries which he lost woefully despite being a sitting governor. He has since remained calm about the situation around him and often avoiding public space.

The former governor has now been rewarded for his faithfulness to the party inspite of resentments into the 2023 election committee.

The The 61-member Contact/Strategy Committee is led by Jigawa Governor, Mohammed Badaru Abubakar, while Ikechi Emenike is the Secretary.

The announcement of the Election Committee was made by the National Secretary of the Caretaker/Extraordinary Convention Planning Committee, John Akpan Udoehede.

The APC scribe Udoehede, said the development was part of ongoing efforts by the CECPC to rebuild and reposition our great party”.

“Yobe Governor and CECPC National Chairman, Mai Mala Buni, will inaugurate the committee on Tuesday at the APC National Secretariat,” he said.