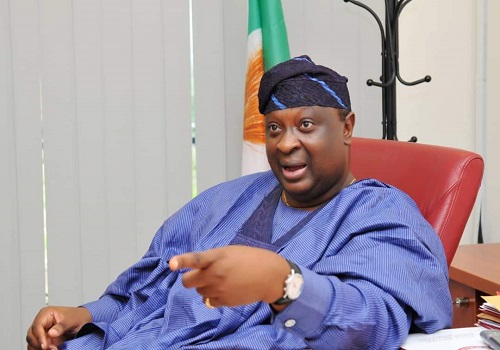 Some of the recent events in the Ogun State chapter of the All Progressives Congress (APC) appear to have birthed some new-age revisionists and offered other willing hands, momentary “jobs for the boys.” It’s nothing unfamiliar; the season is here.

From slinging the proverbial mud at real and perceived enemies to attempting to launder evidently irreparable images as well as standing truth on its head, the bot and troll army is currently on the loose. But, when summed up, they are few and far between. Even more, the timing is not unusual.

The story of the birth of the APC in Ogun State is not a closet history. While some of the intrigues and high-power theatrics culminating in the final product might be exclusive to a few of the leaders, albeit expectedly, the general formation is public knowledge and relatable by many people.

Thus, taking off here, how do you write this same story and discountenance the role of a former governor, Senator Ibikunle Amosun, and his group, in what the party has become today?

Unfortunately, for the fickle-minded, Amosun is not the devil the emergency hirelings are attempting to sculpt in the minds of their unsuspecting followers and has never played God either, even though their failed narratives have tried, effortlessly, to imply so.

Let’s dimension the issues, but first ask yourself: What were those things the fault-finders accused Amosun of in the lead-up to the 2019 elections that the incumbent hasn’t done even worse? Or shall we ask: What reconciliatory move or effort has the incumbent undertaken since assuming office almost four years ago to improve the lot of the APC in Ogun State? Rather, he’s always in competition with himself and illusory rivals.

But when things got to a head, the national leadership intervened in Ogun and a few other states, where the internal crises seemed to have peaked with threats of implosion, and came up with a sharing formula just so the contending forces were accommodated for peace to reign. What did the incumbent do? He declined the recommendations – all of them – and further set the party on fire.

Isn’t it obvious this was what forced some of our loyal members out of the party to seek placement in other parties that could accommodate their interests? Should Amosun take the blame for the obvious failure of the incumbent, compounded by his arrogant and infantile choices, a disposition evident in his underwhelming performance in the state?

Needless to say that Amosun did a lot to stop some of his men from leaving the party, but how was he able to stop them from crying when the incumbent wouldn’t stop flogging them, deliberately to feign a sense of control and as well boast the structure he does not command?

Suffice it to state, and for the record, that even when many of our core members considered it expedient to leave the party in the face of the unceasing persecution by the incumbent, they still left for a party that would not undermine the politics and aspirations of the party at the national level.

This is because they had resolved that, head or tail, our presidential candidate, Asiwaju Bola Tinubu, would be elected Nigeria’s President in 2023 and would work hard enough to see it through. But this resolution cannot be extended to the local politics of Ogun State, which directly affects them, their aspirations and support base.

For the record, Amosun nurses no more ambition since he yielded his presidential bid to Asiwaju Tinubu. In addition, his decision to leave the Senate was personal and he has yet to renege on it. To this end, those concocting lies and imaginary possibilities just so their retainership is secured can start pondering other avenues to survive.

Conversely, however, while this is not in any way entertaining any form of distraction or dignifying helplessly inane and feeble minds with questionable character occasioned by defective upbringing, Ogun State has never been anyone’s inheritance and no one could lay claim to such, even if under an influence. But, indeed, it is our commonwealth – too important and too dear to the people of the state to be left in the hands of simpletons or plunderers of our common patrimony.

Let it be known, therefore, and for the record, that the battle to save the state is not personal but in collective interest and for the good of all. But if anyone is too shock-stricken to consider this an avenue for trade-tackling or waiting for a sparring partner in some sort of pig fight, that is not going to happen, and this, on our honour, shall be our final notes, as far as the contradictions in the Ogun APC are concerned.

May God preserve us all beyond the 2023 elections.