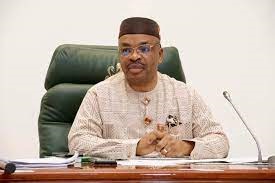 The budget, which is referred to as the “Budget of Completion,” comprises a capital expenditure of N353 billion and recurrent expenditures of N344.005 billion, for a total of N697.005 billion, as opposed to the previous year’s revised provision of N631.881 billion.

When Governor Emmanuel presented the budget to the House of Assembly in Uyo, he outlined how it was based on an oil benchmark price of $70 per barrel and a production rate of 1.69 million barrels per day, with a focus on the policy goal of consolidating the accomplishments of the Completion Agenda’s eight points.

The Governor went on to say that the policy objectives of the 2023 budget would include: promoting the state’s economy to create opportunities for gainful employment through industrialization, agriculture, as well as air and sea infrastructure; maintaining support for SMEs as the engine of our economy to encourage local capacity in manufacturing and the use of our locally made products for domestic use exports;economic diversification to create more wealth, sustainable employment and food sufficiency; amelioration of poverty among vulnerable groups, including women and persons living with disabilities through pro-poor spending, among others.

He also provided strategies for achieving the goals, such as partnering with foreign investors in pertinent state economic sectors and vigorous human capital development, expanding the state’s industrial base to increase the supply of goods and services for domestic consumption, improving the quality and timeliness of public service delivery through automation and effective intra- and inter-MDA collaboration, and more.

Governor Emmanuel urged for careful examination and prompt passage of the 2023 budget while outlining the benefits of legislative-executive cooperation for the state in previous years. He also pledged to faithfully carry out any provisions of the budget for the benefit of the state’s residents.

In his words, “I, therefore, appeal for your approval on my submissions and your support for its implementation. We promise a faithful implementation of this ‘Budget of Completion’ for the general good of our people. Our resolve to alleviate poverty and restore hope, create wealth, generate employment, stimulate agriculture and industrial development and uplift the overall welfare of our people remains unflinching.”

In response, Mr. Aniekan Bassey, Speaker of the Akwa Ibom State House of Assembly, acknowledged the positive and results-driven relationship between the executive and other branches of government, which, he claimed, had contributed to the state’s growth and development. He also praised the governor for his wisdom, openness, and accountability in managing the state’s resources as well as his unwavering dedication to serving the people of the state.

The Speaker promised the commitment of the legislature in the execution of its obligations to the development of the state and invited Ministries, Departments, and Agencies of government to collaborate with the House of Assembly to make the passage of the budget seamless.