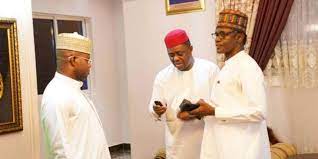 A former minister of aviation, Femi Fani-Kayode, has again sparked rumour that he may defect from the All Progressives Congress (APC) to the Peoples Democratic Party (PDP).

The rumour emerged following his meeting with the Kogi State governor, Yahaya Bello, and the APC interim national chairman, Mala Buni. Femi Fani-Kayode has in times past criticised the Buhari administration.

He disclosed that the meeting with took place on Thursday night, March 18, lasted to Friday morning. Fani-Kayode said: ”More bridge-building, cross-fertilisation of ideas & discussions about how to move our country forward last night with Governor Mai Buni of Yobe state (who is the National Chairman of APC), Governor Yahaya Bello of Kogi state, Sen. Grace Bent of Adamawa state and yours truly. Great discussions into the early hours of the morning. Fruitful and productive. God bless Nigeria.”

This is not the first time the former minister will be having a meeting with APC members. Back in February 2021, he had a similar meeting that fueled rumours that he had defected to the APC. But he denied defecting to the ruling party. Meanwhile, many Nigerian governors and prominent politicians even from the northern part of the country have favoured the agitation for the south to produce the next president come 2023.