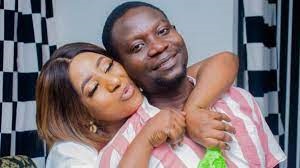 Actress Mide Martins on Tuesday, August 30 posted a funny video of her husband and colleague Afeez Owo rocking her wig on a movie set.

In the video posted on Instagram, Afeez was wearing a brown-coloured wig and making funny gestures while Mide Martins filmed him.

Another actress Bimbo Oshin who was also in the video made jest of Afeez, saying he looked like American rapper Snoop Dogg after Mide joked about Bimbo tripping for her husband.

Captioning the video, Mide wrote: “FUN TIME WITH MY FAMILY. AUNTIE MI @bimbooshin You Dey Trip For My Hubby. Popcy @officialafeezowo You’re Doing Well My Love. Love Is All We Need.”

The hilarious display generated reactions from celebrities and fans who could not hold back their laughter over the video.

While some called Afeez a low-budget Snoop Dogg, others said he looked gorgeous in a wig.

Afeez and Mide are well known for their funny displays on Instagram.

The actress recently posted a video of her husband spraying money on her at a birthday party and when he took a break, Mide tried to grab the money from him; an act which got the couple laughing.

Captioning the video, the Yoruba actress wrote: “Popcy Wetin Happen Nah. You wan burst my bubbles because of this small change
Haba!!! @officialafeezowo Kilosele. Anyway sha kuku bring everything make I know wetin I dey suffer for. Chaiiii I too like money.”

On her birthday in April, Mide got a surprise birthday treat from Afeez. She was lured into a glamorous private party held in Lagos.

Celebrating his wife’s birthday, Afeez described Mide Martins as his queen, his joy, and world’s best, stating that she is a good wife and mother to him.

The actor added that he is proud of his wife any day and time. He also prayed that her joy would never go down and that everything she holds will continue to increase.

He wrote: “Happy birthday to my Queen, my Joy, My world best my everything you are a good wife and mother to me, you are beautiful in and out, I’m super proud of you any day anytime, your joy will never go down Ajoke, everything you hold will continue to increase inshallah May Almighty Allah continue to channel your way may he bless your home. Wa jere Awon Omo e lase Olohun love you always my own Elle,igbaa ODun odun Kan niiii @mydemartins”.

The couple reconciled in 2019 after their marriage was rocked by allegations of infidelity.

They renewed their wedding vows during his birthday celebration in April 2020.

They have two daughters, Faridat and Kabirat.