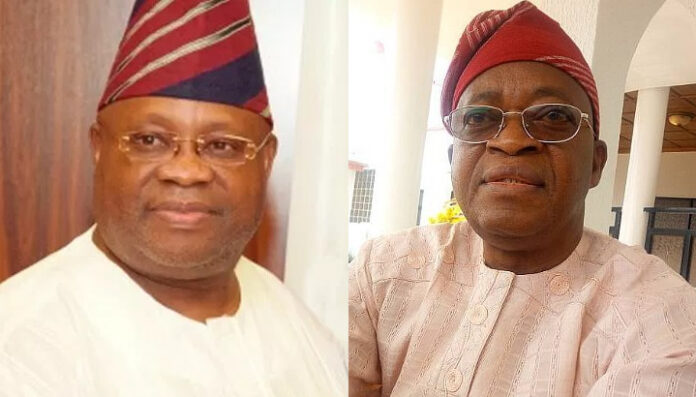 The Osun State Governor, Ademola Adeleke, has put the total debt portfolio of the state at N407.32 billion.

Adeleke, who spoke at the monthly meeting of Osun State Traditional Rulers, held in Osogbo on Thursday, explained that the figure was arrived at, after various sums of money in the 8 credit facilities inherited were added to arrears of salaries and pension owed workers and retirees.

The governor said his administration inherited 8 outstanding loan facilities, repayable between the period of 16 months to 28 years, totalling N331.32 billion, while the administration also had N76 billion debt of arrears of salaries and pensions owed by the previous administration.

He further said, “The total loan stock as of today is N331.32 Billion. If the N76 billion debt on salaries and pensions are added, the state is indebted to the tune of N407.32 billion. The amount owed to contractors are yet to be determined. The only fund in government coffers, as at Monday 29th November, was for November 2022 Salary. Otherwise, the state treasury was empty.

“As your Governor, I will ask questions on your behalf. And will demand answers. Governor Oyetola must explain how the N331 Billion borrowed in the name of Osun State was expended, with no obvious infrastructural development to justify this huge debt.

“Governor Oyetola must explain how the N18 Billion Bridge loan taken after he lost the election on July 16, 2022, was expended. Governor Oyetola must also explain why Osun state is owing salaries & pensions to the tune of N76 Billion after collecting a N50 Billion Salary Bail Out Loan from the Federal Government.”

“The creditors, especially the Commercial Banks must explain why various loans were given to an administration beyond its 4 year tenure.”

In his remarks, Ooni of Ife, Oba Adeyeye Ogunwusi, who presided over the meeting, urged Adeleke to remain focused on his plan for the state and assured him that monarchs would continue to offer advice that would enhance development and ensure peace in Osun.