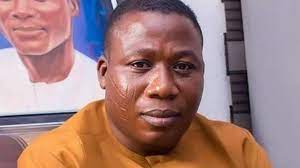 The latest statement by Sunday Adeyemo, also known as Sunday Igboho, now popularly referred to as Yoruba activist, declaring Yoruba nation a separate country may just be a replay of the hand of Esau with the voice belonging to Jacob, stakeholders have said.

Igboho came to national prominence after he issued a quit notice to Fulani herdsmen, believed to have been terrorising the Ibarapa area of Oyo State. Specifically, he gave them seven days to leave the area or they would be forced to do so.

Though many took the quit notice as a joke of some sort, arguing that he had no right to ask any Nigerian to leave wherever they may choose to reside, he and his followers made good their threat, as on the due date, he stormed Igangan, which was then, the epicenter of the alleged criminal activities of the herdsmen. In the process, the Seriki Fulani of Igangan was dislodged from the area and he had to flee to Ilorin, where he has made his abode till date.

This singular action by Igboho catapulted him to national prominence, both positively and negatively. For many, he is a non-state actor that has no right to embark on such adventure, while many Yoruba supremacists applauded him to high heavens, elevating him to the status of a cult hero who has come to deliver his people from perceived bondage.

As good as many may have viewed his activities, Igboho, on Sunday took his activism to another level, declaring, albeit unilaterally that Yoruba people are no longer part of Nigeria.

In a video that went viral, Igboho with a caveat announced that the Yoruba people of the South-West geopolitical zone were tired of belonging to Nigeria and a Yoruba nation is in the offing.

Igboho said: “The Yorubas that are everywhere are larger than most countries, therefore, we call on the global community and the United Nations to come & separate us.

“We are no longer interested in being part of Nigeria. Before this becomes war, they need to intervene because we want to go.

“As it stands now, we are no longer under Nigeria. If they don’t intervene, it will go beyond control. We have gone beyond the point where we keep quiet; we are no longer scared to voice out.

“We are not safe anywhere, we can’t sleep in peace, we can’t travel in peace, what have we done? Are we slaves? We don’t do wrong by existing, we only chose the wrong leaders and we are saying enough is enough!

“TIN CAN in Lagos, Apapa, the directors are Fulani men. The two ports we have, the controllers are Fulanis. We don’t want them any more!

“All our Kings are solidly behind us, any of them that want to deny it should make a press conference, let’s see. He won’t see the light of the next day! My advice to the Yorubas in the North is to find your way back home.

“Start coming home, it is time! We have suffered enough, let’s not fight among each other, let’s unite for a common cause, it is time to come home. That’s all I have to say.”

Not to be caught unawares some youths in the Northern part of the country, the Arewa Youth Assembly, said that since Sunday Igboho has declared the Yoruba nation, saying they will no longer accommodate and accept the presence of Northerners, he should in the next 72 hours evacuate his people from the North or they will help him in doing so.

The Northern youths, in a statement signed by Mohammed Salihu Danlami, Speaker, Arewa Youth Assembly on Friday, said: “The Arewa Youth Assembly still affirms its position as a law-abiding civil youth organization, notwithstanding, it will not fold its arm and watch innocent Nigerians being threatened by individuals who clearly have no regard and respect for the law.

“As such, we will like to bring to the notice of Mr Igboho that since it is he who wants his people out of the North to form a Yoruba nation, we will make it easy for him by asking Mr Igboho to provide a means of transportation to convey his people to the southwest.

“We are, hereby, giving him the ultimatum of 72hrs to move his people out or we will be forced to take necessary actions by personally taking the responsibility of getting his people back home.

“We have kept quiet for the sake of peace and for the respect of the laws of our country. But as Mr Igboho rightly said, ENOUGH IS ENOUGH, he either calls himself and his accomplices to order or force us to retaliate the best way we know.

“It is in the light of this recent event that we wish to call on the Northern elders, traditional rulers, and all security agencies to support us in accomplishing this task of evacuating the Yoruba out of the 19 Northern States and the FCT Abuja, making it a very peaceful exercise devoid of loss of lives and destruction of property or hijacked by hoodlums to prevent the reoccurrence of the EndSARS protest.”

With the response from the Northern youths, either real or a mere bluff, it is certain that the latest utterances of Mr. Igboho may do more harm than good to not the Yoruba people resident in the North but also the Nigerian nation.

DAILY POST, in a bid to understand the confidence and temerity with which Igboho has been carrying out his activities, spoke to a number of Yoruba stakeholders and the ordinary man on the street, and they were unanimous that it is impossible for him to be acting alone without the backing of some powerful forces who share the same ideology with him.

For many of the respondents, Igboho is merely a frontman and the voice of his backers, insisting that he is too low in the hierarchy of Yoruba elders and leaders to make such sweeping statements he made in the viral video.

For Mr. Tunde Sosina, who sees himself more as a Nigerian before being Yoruba, it was unfortunate that a character like Igboho, an acclaimed thug, though allegedly, could be speaking on behalf of the highly sophisticated people of the South-West.

“It is really unfortunate that Igboho has been elevated to such a height that he would come out and speak on behalf of the Yoruba nation. It is actually disheartening and an aberration that a race that parades such eminent personalities as we have can be reduced to such a level that Igboho can declare that we are no longer a part of Nigeria.

“And when you consider the fact that opinion leaders in the zone have not found it expedient to speak out against what he has said and declared, you begin to think there is more to meeting the eye. Whatever they are thinking that has not made them speak out against the supposed unilateral declaration, is best known to them, but I honestly believe Igboho has some backing”, Sosina said.

Speaking in the same direction, Mr. Agboola Oyekanmi, said the presence of Professor Banji Akintoye, the leader of the Yoruba World Congress and a known advocate of a Yoruba nation away from Nigeria, speaks volume of the kind of backing Igboho has.

“When I saw Professor Akintoye in the video, I knew immediately that Igboho is not acting alone, as the respected academic shares exactly the same views with him, and he has not hidden that fact over the years. But what I find curious is the fact that the Professor, with all his exposure and experience, will sit back to allow Igboho to play a leading role is such an instance.

“It may also be that because of his crudeness and oratory vibrations, they think he is better in driving home the point they are trying to make. But whichever way you view it, what they allowed to happen is a big insult to the Yoruba nation, both at home and in the Diaspora”, he said.

Another respondent, who does not want his name mentioned, said the silence of Afenifere is disturbing, insisting that the leadership of the apex Yoruba Socio-cultural organisation is both disturbing and implicating.

“I smell a rat with the silence of Afenifere. By now, they should have come out with a statement condemning Igboho’s declaration, if they are not secretly backing him or if he is not doing their bidding.

“The group, over the years, have always spoken out on issues affecting the Yoruba people, even in less serious manners, but when they are needed most to provide direction, they are nowhere to be found. You will recall that the Pan Niger Delta Forum (PANDEF), shortly after Asari Dokubo declared the Biafra Customary Government and annexing the region into it, came out to dissociate themselves, declaring that it is not a secessionist group but one that is fighting for true federalism and restructuring. That, to me is what an organisation that is not working in concert with Igboho should have done. Speak out, make your stand known in an unambiguous manner. But for now, one may be right to conclude that Afenifere is complicit in this,” he submitted.

Bearing his mind on the subject, Mr. Adeola Ojo believes declaring a separate nation or government out of Nigeria has now become fashionable, following in the step of Nnamdi Kanu and most recently, Asari Dokubo.

“For me, it is the season of unilateral declaration of independent republics and constitution of alternate governments. It is the new trend for tribal activists, and it may not be long before someone or a group in the North will come up to join the circus show.

“For me, the likes of Kanu, Asari and Igboho should not be taken seriously, especially Igboho, who is merely basking in his new found fame and visibility. So he must do everything to himself in the spotlight and what better way does he have than to play to the gallery, which he has just done. No one should lose sleep over the empty declarations and threats, because they are only meant to foster the erroneous image of freedom rights or activism that has been attached to them”, he said.

Other respondents, who craved anonymity for one reason or the other, opined that the activities of Mr. Igboho are embedded with more dangers than good for Yoruba people domiciled in other parts of the country.

According to them, if the ultimatum of 72 hours for Yoruba people to leave the North is taken seriously, then Igboho has successfully exposed the same people he claims to be fighting for to more dangers.

Some other respondents, however, applauded him for being courageous and committed to the liberation of the Yoruba race. According to this group, the so-called leaders and elders of the race have abandoned the people for their selfish interests, leaving someone like Igboho to rise to the occasion.