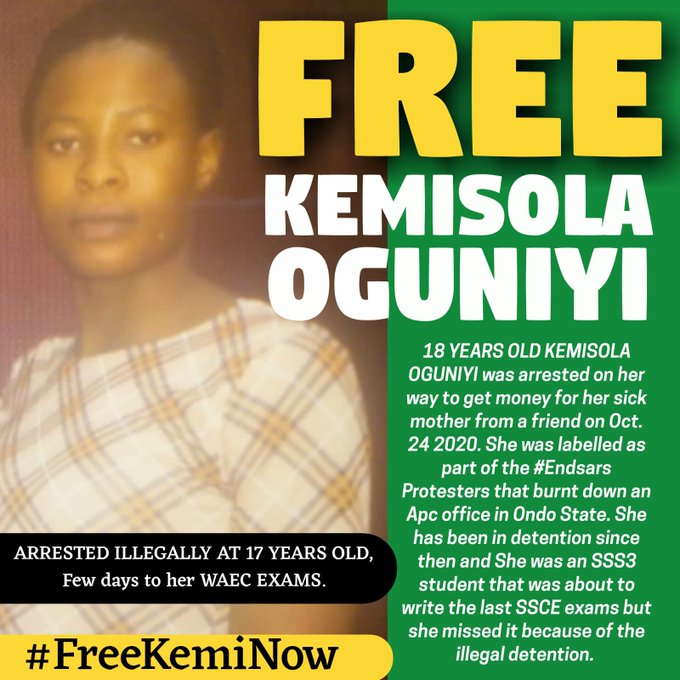 It is over five months since 17-year-old Kemisola Oguniyi was arrested and detained at the Surulere Prison, Akure, Ondo State. Her parents are saying the illegal detention of their child has caused more wreck and tears for the family.

On October 24, 2020, Kemisola was whisked to the State Criminal Investigation Department in Ondo, while going to get drugs for her sick mother. She was accused of having connections with #EndSARS protesters who burned the All Progressive Congress (APC) secretariat in the state. She was charged with arson, among other offences.

Before then, on October 21, rampaging youth had attacked the Akure APC secretariat and set the edifice ablaze. The youth claiming to be #EndSARS protesters had defied the 24-hour curfew imposed by the state governor, Rotimi Akeredolu, to mount roadblocks across the streets of Akure.

Following the incident, security operatives in the state had indiscriminately raided the streets of Akure in the name of arresting the culprits. Kemisola and others were arrested and remanded in the process.

Kemisola’s detention was not known to the general public until Twitter users, especially members of the RevolutionNow group, raised an alarm that the teenage girl was languishing in prison.

“She was not an EndSARS protester; she never protested,” Mrs Felicia Ogunniyi, Kemisola’s mother, said.

“We’ve spent a lot to secure her release but we couldn’t; her father lost his job over her matter and we’ve lost all we had on this case. Please help us.”

Corroborating, Kemisola’s father, Mr. Rotimi Ogunbiyi, said the case has wrecked him financially and mentally. He added that he has spent every dime he has on the matter.

“In fact, it has been a while since we last visited her in prison because we have nothing to offer her,” he said.

When contacted for comments, Tee-Leo Ikoro, the Ondo Police Public Relations Officer, said the matter was no longer in the hands of the police. He urged the public to note that the case is now in court.

I’m surprised people are saying that she’s detained by me. I’m just the Police PRO. What am I that I will detain somebody? I have explained to them but they don’t want to understand,” Ikoro said.

“If they have anything as evidence in her favour, there’s a tribunal going on here; let them go there and present their case. How can I detain an underage? I speak for the police in Ondo State.”