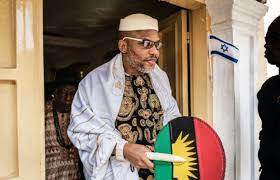 A serious warning has been issued by Nnamdi Kanu, the leader of the Indigenous People of Biafra, IPOB to unknown gunmen in the Southeast.

Declaring the days of the gunmen in the Southeast as numbered, Kanu during his routine meeting with his legal team led by Ifeanyi Ejiofor at the facility of the Department of State Services, DSS, on Thursday, said the unknown gunmen have no connections with IPOB, stating that they are criminals.

The statement by Ejiofor reads: “We seized the opportunity offered by the visit to brief Onyendu (Nnamdi Kanu) of the barbaric act of the criminal gangs who kidnapped my aunty a week ago, and her subsequent release.

“It is pertinent to note that the criminal gangs, who engaged in this sacrilegious act, in active connivance with some locals have nothing to do with IPOB.

“They are purely criminals who would soon be apprehended. To this end, Onyendu declared that the days of these monsters are numbered.”