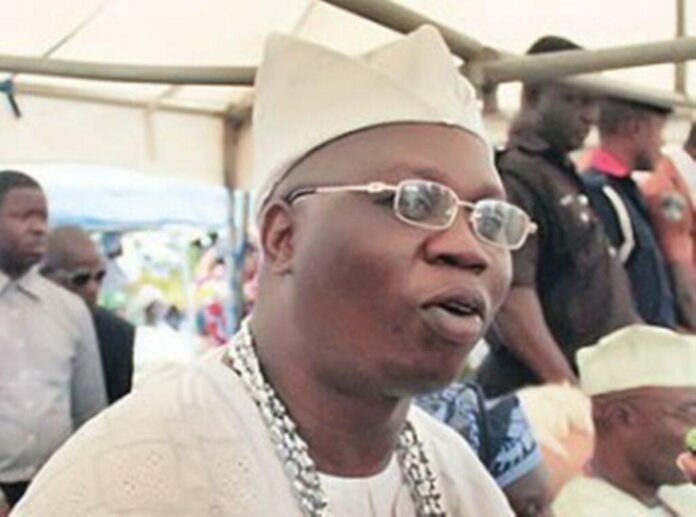 The Aare Onakakanfo of Yorubaland, Iba Gani Adams has condemned in strong terms the attack on the residence of Chief Sunday Adeyemo, popularly known as Sunday Igboho early on Thursday.

Adams described the attack as a ploy to silence Igboho or stop him from expressing his views on the state of the nation.

He, however, charged the Nigerian Government to investigate the circumstances surrounding the ugly incident and bring the perpetrators to justice.

Adams, in a statement on Thursday by his Special Assistant on Media, Kehinde Aderemi, described the attack, which he said led to the death of eight persons, with wanton destruction of his property, as very unfortunate.

The Yoruba generalissimo said the attack has exposed the Federal Government, especially on the spate of insecurity in Nigeria.

He said the incident was a ploy to prevent Igboho from agitating for the Yoruba nation, which, according to Adams, is what many Yoruba people, both home and abroad, want at the moment.

“The attack on Sunday Igboho’s house is most unfortunate. It is a reflection of the fact that our lives as Nigerians are of no value to the government. And the truth is that nobody is safe in this country,

“The recent attack was the second in six months. The first was in January when his Soka residence was razed by unknown arsonists. And up till date, nobody has been apprehended in respect of the ugly incident.

“Those agitating for the Yoruba nation have been the targets of this administration and the two attempts at Igboho’s houses within six months cannot be said to be ordinary. They were ploys to cow him and frustrate him.

“For instance, the British government didn’t at any time, subdue the agitations of Scotland or Ireland. Even in Canada, Quebec settled for a region after seeking self-determination from Canada. It is their legitimate right and such must be protected under the ambit of the law.

“As a government, it is your duty and responsibility to change people’s views through better policy implementation and programmes that are in the interest of the masses, not the other way round.

“The video clip of the attack on Sunday Igboho’s house was a show of death and destruction. About eight people were allegedly killed in the attack, with wanton destruction to his property. The information at my disposal also indicates that the attack was allegedly done by the Nigerian Army in collaboration with foreign terrorists. Imagine if Igboho was killed in the attack, it might lead to a raging war. Remember the case of Boko Haram leader, Muhammed Yusuff,who was killed in 2009. The death of Yusuff became Nigeria’s nemesis and Boko Haram has created the most challenging problem in Nigeria till today.

“As far as I am concerned, I don’t support anything that negates the law or anybody that disobeys the law, however, the Federal Government should be able to tolerate other people’s views by taking into consideration the rights of every citizen as it is in the constitution. This is what makes democracy thrives,” Adams said.