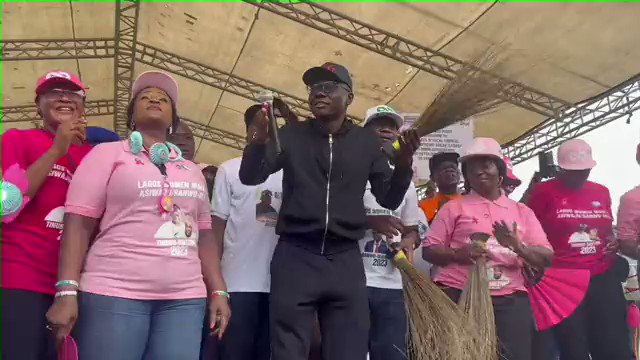 The women who spotted different colour T-Shirts with Tinubu’s insignia, chanted various solidarity songs in support of Tinubu/Shettima Presidency in 2023.

The activities led to traffic gridlock as motorists were forced to slow down to pas through narrow lane assigned for movement.

The group mainly women came out in large numbers as they marched at the Lagos Island, CMS and other areas and terminated at Mobolaji Johnson Arena, formerly Onikan Stadium, Onikan, singing and hailing APC Presidential candidate of Tinubu/Shettima.

A post shared on Twitter by a supposed supporter, showed the women walking through major streets and highways in Lagos, saying Tinubu remain the best out of the Presidential candidates in 2023 general polls.

As of 1 pm, the rally was gradually spreading to other parts of Lagos, like Onigbongbo, Maryland, Onigbongbo Local Council Development Area, LCDA.