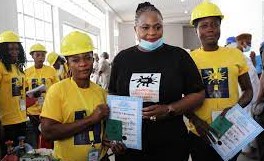 The National Centre for Women Development has trained more than 2,000 women in carpentry, tilling and POP making as part of an initiative by the centre to empower women nationwide.

The Director-General of the centre, Mrs Mary Ekpere-Eta, made the disclosure at a news conference in Abuja.

Ekpere-Eta, who was speaking with newsmen on the achievements of the centre in the past four years, said that she was keen on fostering women empowerment against the backdrop of the negative impact of COVID-19 on women.

She said that she had commenced an empowerment tour of the six geo-political zones to assist women to scale-up their businesses.

The director-general explained that the tour which commenced from Cross River in the South-South would train women on new skills to make them self-sufficient and pull them out of poverty.

“At the peak of the COVID-19 pandemic, we were at the front lines.

Our centre was used as quarantine centre and we did not complain and everything was properly managed.

“Now at post-COVID-19, we are training women to bring them out of poverty, especially those ones that have lost their source of incomes during COVID-19.

“We have empowered many women in Cross River. We are going to the North East then the other geo-political zones with our empowerment programmes.

“We will train the women on poultry, fishing, tailoring, soap-making, among other vocations.”

Ekpere-Eta said that the centre had also developed a gender-based violence dashboard which had been used to track sexual offenders with a view to prosecuting them.

She said that the centre had also collaborated with the Federal Ministry of Agriculture to train women in various aspects of agriculture, saying that up to 1,000 women had benefited from the scheme.

Ekpere-Eta lauded President Muhammadu Buhari for his interest in women issues, stating that his administration had paid serious attention to women empowerment.

She said that the Buhari administration was the first to adopt the bottom-top-approach whereby women were taken into consideration in various interventions to cushion the effects of poverty.

The director-general, however, called for more support to the centre for it to achieve its mandate and set goals.