Why we won’t participate in PDP presidential campaign-Wike, Makinde, Others 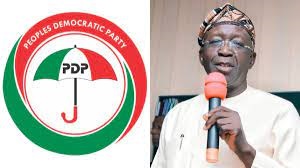 Rivers State governor, Nyesom Ezenwo Wike, his Oyo State counterpart, Seyi Makinde and other stakeholders have resolved not to participate in the Peoples Democratic Party (PDP) presidential campaign until, Senator Iyorchia Ayu, resigns as the national chairman of the party.

They emphasised that the publication of the Presidential Campaign Council list without the resolution of the Senator Ayu lingering debacle, translates to “putting the cart before the horse.”

Arising from a crucial meeting in the early hours of Wednesday in Port Harcourt, governor Makinde said they hope that the powers that be within the PDP will listen to the voice of reason and do the needful.

The former PDP South -West national vice chairman, Chief Olabode George, who read out the communique after the meeting, said they are concerned about the divisions in the party, and bemoaned the failure of the leadership to utilise the internal conflict resolution mechanisms to ensure inclusiveness of all and guarantee victory for the PDP.

“The published presidential campaign council list translates to putting the cart before the horse. The pertinent issue before the party remains the resolution of the Ayu leadership debacle, which is a departure from the spirit and letter of our constitution which undermines the unity of our great party.

“Consequently, we resolve not to participate in the campaign council in whatever capacity until the resignation of Senator Iyorchia Ayu.”

In the same vein, former Plateau State governor, Senator Jonah Jang said the description of Sokoto State governor, Aminu Tambuwal as the PDP presidential primaries hero by Senator Ayu, is antithetical to the principle of justice, fair play and equity on which the party was formed.

“It is true that everything is been done for us to have internal democracy in the party. But, for the national chairman, Senator Iyorchia Ayu to go and embrace Tambuwal, calling him the hero of the convention, which means there was a private arrangement that was done with Tambuwal to short change other contestants, including governor Wike. Here was a referee who now help one of the sides to score a goal, and then blow the whistle that a goal had been scored.

“This is not what we formed the PDP to do for Nigerians, and therefore, we unequivocally asked that Ayu has to step down, so that having got the presidential candidate from the northern part of the country through his assistance, he should as well now step down so that a national chairman can move to the south, and the party can be united for the campaign towards 2023.”

He said governor Wike and others call for Senator Ayu to resign is aimed at addressing the structural imbalance in the party’s hierarchy.

He insisted that as committed PDP members, they’re sincerely desirous that the PDP returns to power and provide Nigerians excellent governance.

“But that cannot be achieved unless we have a proper structure of the party as designed by the founding fathers. We are men and women who are committed to the issues of justice, fairness, equity. You cannot build on a faulty foundation.

“Therefore, this call for the chairman to step down or resign is not because any of us is aggrieved, but because we believed it is important to ensure a fair structure, a just structure, a principle structure, a constitutional structure for the party.

“If we want to restructure Nigeria, we should have the courage to restructure our party. And that is why we have met and decided that this is extremely important, and therefore we want Nigerians to know.”

Gana maintained that they will remain committed members of PDP, but will continue to insist that the right things be done.

Former Gombe State governor, Ibrahim Hassan Dankwambo, who also spoke, declared that they will work for the party to the extent that fairness, equity and justice is ensured in the party.