What Sammie Okposo discussed with me before he died – Apostle Suleman 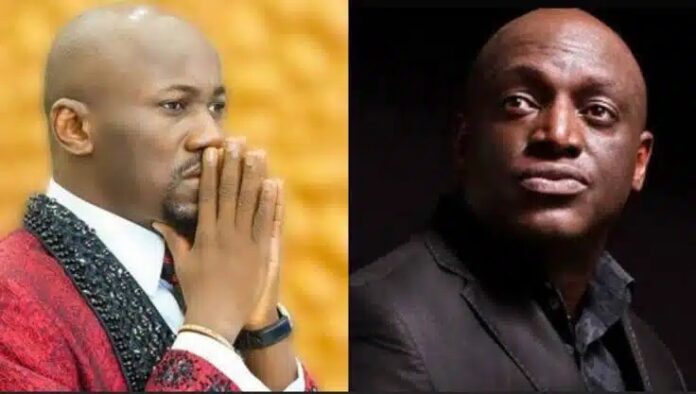 Apostle Johnson Suleiman, the senior pastor and president of the Omega Fire Ministries Worldwide, has revealed what he and gospel singer Sammie Okposo discussed before his demise.

The news of his sudden passing on Friday had sparked controversies on social media.

Okposo, who was one of Nigeria’s most decorated gospel musicians, recently hit the headlines over an infidelity scandal.

The singer later tendered an apology but later deleted the message on Instagram.

Following the scandal, he took time off from ministration in order to retrace his step with God.

Following the news of his demise, Nigerians on Twitter had reacted, with some saying his death was a repercussion of his affair while others paid tribute to the singer who has won souls to Christ with his sonorous voice.

Apostle Suleman, a televangelist has also paid tribute to the singer, and slammed those posting his pictures after Okposo’s death but never reached out to him in his trying times.

The cleric wrote: “Now they post his pictures…but never reached out in his trying times..
He told me what pastors did to him and we both wept..

“Love has left the church.. We have more ‘lawyers’ who are ready to judge than intercessors ready to restore..

“Rest in power my brother.. You conquered!”

His tweet has since garnered reactions from tweeps, with some blaming the religious body for being judgmental.

Recall that in July, the internet was agog with the cheating allegations levelled against Apostle Suleman.

Series of allegations were levelled against the cleric after videos and messages of an actress surfaced on social media pages.

He was accused of sleeping with some Nollywood actresses.

However, some of the actresses named have taken to their social media pages to outrightly debunk the allegations, while some have deliberately ignored them.