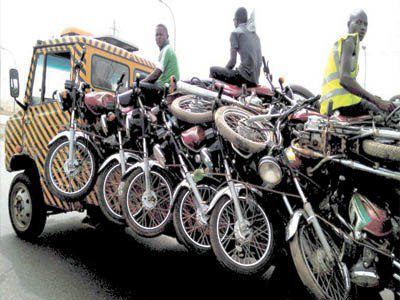 The Vehicle Inspection Office in the Federal Capital Territory has crushed 3,200 motorcycles impounded between November 2021 and July 2022, while over 600 are awaiting court orders for crushing.

Disclosing this in Abuja on Thursday, the FCT VIO Spokesman, Kalu Emetu stated that the directorate had embarked on massive impoundment in the territory, to eradicate commercial motorcyclists from operating within the city centre.

Emetu said that the directorate always obtains a court forfeiture order after impounding the motorcycles before crushing them.

“When we get a considerable number of impounded motorcycles we will approach the court an order.

“Upon impoundment and approval from the court, we crush the motorcycles then sell the parts to recycling companies.

“These people use it for other things and then the money gotten is remitted to the Federal Government,” he said.

He said that the implementation of number plates on commercial motorcycles in the territory had been a challenge for the directorate.

Emetu said that although commercial motorcycles have been banned from operating within the city centre, they are permitted to operate in satellite areas of the FCT pending the planned ban of motorcycles in the country.

The spokesman said that every motorcycle, including dispatch motorcycles must have a number plate which is one of the conditions for operating in the territory