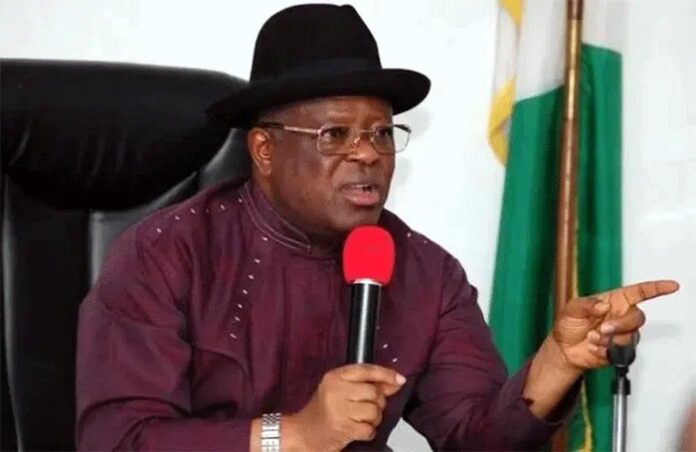 Ebonyi State Governor David Umahi has sworn in the 13 newly elected chairmen of Local Government areas of the state despite court order.

The inauguration was held on Thursday despite a judgement of the Federal High Court sitting in Abakaliki which nullified the said local government elections.

The event also featured the flag-off of empowerment of 3,480 people of the state as part of the offshoot of the #Endsars palliative.

The beneficiaries are to be paid N300,000 each in the first batch of the disbursement.

Umahi said: “I congratulate all the newly sworn in chairmen. I charge you as a matter of urgency to inaugurate the council legislative arm before 9am on September 2.”

Umahi insisted that the ex-parte order granted by the State High Court empowered him to swear in the council chairmen.

The Governor also reiterated that the tenure for chairmen and councilors remains two years as enshrined in the amended Ebonyi Local Government Law 005.

The Ebonyi State Independent Electoral Commission conducted the council election for the 13 council areas and 171 ward councilors with the All Progressives Congress winning all the seats.

Otu Collins Eleri, Nelson Eze, Akaa Ikechikwu, Micheal Ali, and Isu Amaechi had dragged the electoral umpire, EBSIEC and the government to court for not giving all the aspirants a level playing ground during the election.

The presiding judge Justice Fatun Riman in Suit No: FHC/AI/CS/151 said it was undemocratic and unlawful to conduct an election in the local government areas or council without availing the plaintiffs of the exact law that is meant to regulate the exercise.

Counsel to the plaintiffs, Mudi Erhenede said the processes that produced the chairmen were not transparent.

“There are a lot of other issues with noncompliance with the Electoral Act 2022.

“The Electoral Act 2022 said the procedures for conducting elections in the local government areas by state commissions must comply with that procedure for conducting into area councils in the FCT.

“If you look at it, how do you access compliance without law if you hide the law with which you want to conduct the election? Is it not when you make the law public that we will know whether you complied with it or not, how can you be making laws and hiding them? My position now is that my clients demanded to be availed of this law, we came under the Freedom of Information Act, its intending the procedure to conduct elections, we wrote to EBSIEC, we wrote the House of Assembly, and we wrote to INEC whose responsibilities all of these bodies refused to provide us the law.”