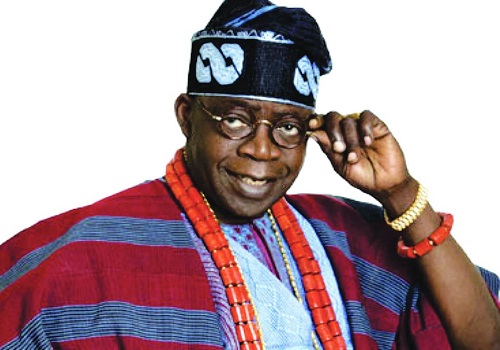 Dr. Abiola Oshodi, the media director for the All Progressives Congress, APC, Presidential Council for Canada, promised that if Nigerians chose Asiwaju Bola Tinubu as their presidential candidate wisely, future generations would once again be proud of their country.

Oshodi, said that Tinubu has the foresight to identify the nations problems, take them headlong and make a solution out of them for the prosperity of the country.

According to him Nigerians needed to keep themselves abreast of political undercurrents  and vote wisely come  February 2023 for Tinubu.

The Media Director, in a statement made available to Vanguard in Akure, the Ondo state capital, said that ” Nigeria needs a competent and visionary person as a President to take it to a new level comes 2023.

“Whosoever wins the presidential election in 2023 will be confronted with monumental challenges and opportunities within and outside the country that will test the mettle of such a president.

“Nigeria is at a delicate stage of its developmental process and needs a President with a hand on experience and Senator Tinubu who has governed Lagos, the most commercial of Nigeria 36 States deserves to be given an opportunity to pilot Nigeria affairs from May 29, 2023,”

According to him ” Tinubu   adroitly managed Lagos – the smallest state in the country but with the highest urban population accounting according to a Lagos official document for the 26.7 per cent of Nigeria’s total GDP and more than 50 per cent of non-oil GDP, controls   80 per cent of the foreign trade flow and with an estimated population of 24 million -larger than many other economies in the  neighboring West African countries.

The Canada based Psychiatrist and the convener of the Oshodi for Tinubu /Shettima media Group noted that ” Tinubu laid the foundation for the current Lagos that today accounts for the chunk of capital importation into Nigeria.

“According to the National Bureau of Statistics, NBS, for Q4 2021, Lagos State alone was the top destination of 90.66 percent of the total capital investment,

“Also in Q2 2022 of all the capital importation to Nigeria, Lagos alone accounted for 66.66 percent, and was followed by Abuja, the Federal Capital with 29.57, leaving the rest 35 states to share a paltry 3.77 percent.

Oshodi described Tinubu as a man with innovative thinking who touched every facet of Lagos as a governor from 1999- 20 04, an attribute needed by Nigeria at this stage of its development for the desired transformation.

“He created the Ministry of Environment to tackle the issue of flooding head on, introduced the one-day governor programme that brought young boys and girls into the limelight and reformed the health sector accompanied with the distribution of free eye glasses.

“He created a Housing Ministry   to redress the acute shortage of housing in Lagos, with a mandate to construct affordable houses and introduced the Independent Power Project, and the Bus Rapid Transportation – BRT, with Lagos State Transport Management Authority. LASTMA to develop a culture of regulation, control management of traffic operations and to ensure hitch free traffic on Lagos roads.

“Tinubu also created 37 more local councils in order to bring government more to the people and brought the Lekki corridor into limelight, the Lekki corridor that that had become a beehive of economic activities with the Dangote Refinery and Petrochemicals, the 650,000 barrels per day integrated refinery, the largest single train refinery in the world;/ the Dangote Fertiliser, a  2.5 billion dollar  investment and the Lekki  Sea Port Nigeria’s  largest multipurpose Port in Nigeria among the  and the companies located  today in the Lekki Free Zone.

Oshodi added that ” If Senator Tinubu was voted as the next president,  he would replicate all these achievements and even accomplish more at the national level and give the country the leadership that would inspire it to greater glory with new thinking, innovative ideas and vision.