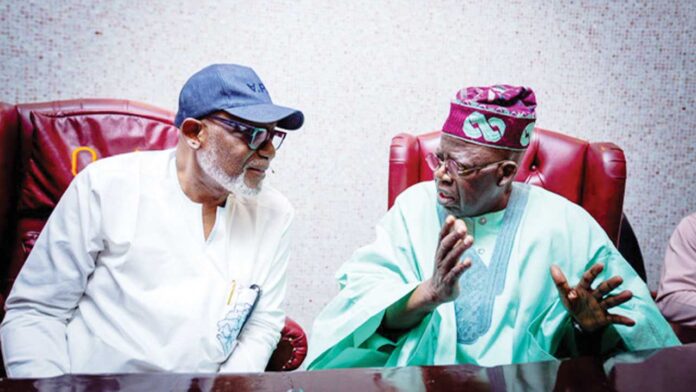 The governor of Ondo State, Rotimi Akeredolu, has stated that if Bola Tinubu, the APC’s presidential candidate, is elected in 2023, he will make sure that Nigeria practices true federalism.

Akeredolu argued that true federalism was important in a diverse nation like Nigeria, adding that it would properly address the fundamentals of nationhood.

The governor stated this on Sunday evening while speaking on the topic, ‘Asiwaju Bola Ahmed Tinubu and the Business of Nation Building,’ during a Twitter Space session.

This was contained in a statement issued by his Chief Press Secretary, Mr Richard Olatunde on Monday.

According to the statement, Akeredolu said the APC presidential candidate would bring a new vista into governance and ensure that true federalism thrives if voted into power; saying Tinubu understands the serious issues affecting the well-being of the country.

He said, “If voted into government, Nigerians will see that we have someone in place that had gone through democratic tutelage. He has been governor, he led a party.

“Asiwaju has deep knowledge about the problems of this nation. He has been part of the struggle to ensure that democracy is enthroned and that a true federal system runs in the country.

“Tinubu’s contributions to the NADECO struggle cannot be denied.”